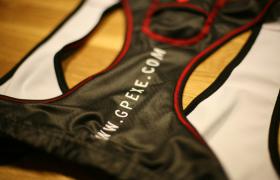 The paragraphs that follow are devoted to a comparison of three systems commonly utilised to collect information on the players’ positions during football matches or training: football video analysis (SICS Videomatch at 25 Hz), GPS (Exelio GPEXE at 20 Hz) and a football speed radar (Stalker ATS II at 100 Hz).

This will show that the information yielded by GPEXE is indeed quite accurate, thus allowing us to move confidently to the second aim of this brief paper, i.e. to illustrate the physiological and athletic relevance of the data that can be obtained by GPEXE.

The main aim of the combined utilisation of football video analysis and GPS monitoring is that of verifying whether and to what extent training (monitored by GPS) mimics the athletic requirements of the match (monitored by video analysis). Obviously enough, if the two systems yield discordant results, the match vs training comparison is meaningless.

We therefore monitored by SICS Videomatch an unofficial match in the course of which several players were wearing Exelio GPEXE. The so obtained speed versus time tracing is reported for one player in figures 1 and 2 (over a 20 or 3 minutes window, respectively). These figures show that the two-speed profiles are indeed quite coherent.

Based on this satisfactory first result we evaluated in more detail the physiological parameters that we deem important to describe and evaluate the players’ performances. These are summarised in the tables that follow reporting the average values obtained over 45 minutes on three athletes of: 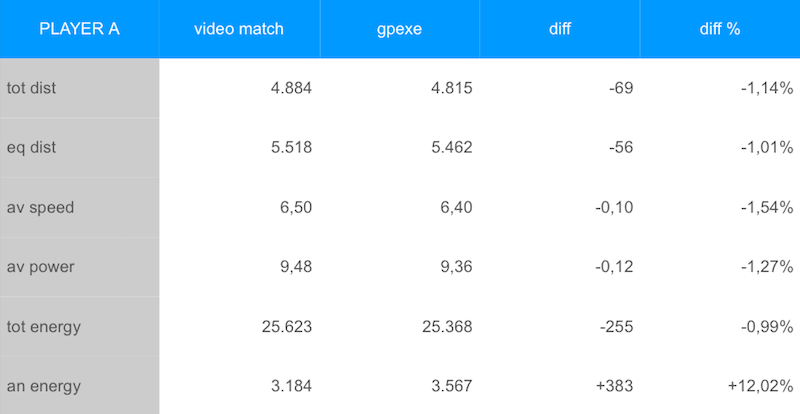 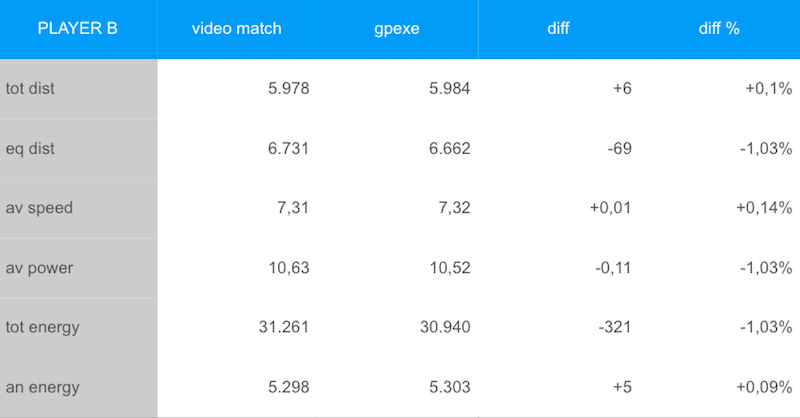 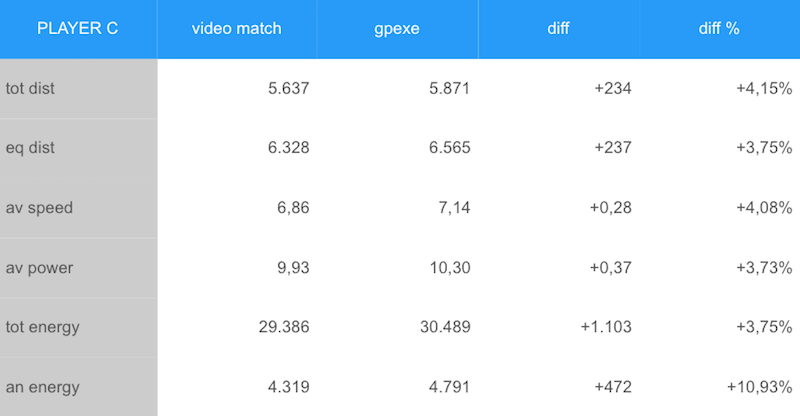 These Tables show that the percentage differences between the two systems (SICS Videomatch and GPEXE) are rather small for all the investigated parameters with the exception of the anaerobic energy which, in two players out of three, turned out to be 11 to 12 % larger for the GPEXE data. As mentioned above, the anaerobic energy is the fraction of the overall energy, spent above the individual anaerobic threshold; as such it is crucially dependent on the high intensity (high metabolic power ) phases.

This prompted us to compare GPEXE and radar during high-intensity tests, with the aim of assessing the reliability of GPEXE at high metabolic power.

The comparison between these two systems requires that the exercise be performed in a straight line since the speed radar beam must always be positioned in front, or behind the runner. We, therefore, asked three subjects to perform 10 shuttle runs (back and forth) at maximal speed over 25 metres, for a total distance of (25 + 25) * 10 = 500 metres.

The so obtained speed versus time tracings during two shuttle runs, as obtained by speed radar or by GPEXE, are reported for one player in figures 3 and 4, respectively. These figures show that the two-speed profiles are indeed quite coherent.

The same data as described above (see points 1 through 6) are reported for the three athletes in the tables that follow. It should be noted that the overall distance, as estimated by Radar or by GPEXE, exceeds the theoretical 500 metres because it includes also the deceleration phase performed after the 25 metres line and the subsequent repositioning of the subject on this same line. These tables show that the agreement between the two systems is quite good, thus showing that the data obtained by GPEXE are accurate also at maximal running speeds, even if, admittedly these tests are rather standardised, as compared to typical soccer activities.

To conclude this brief overview we would like to point out that the expectation and hope that the three systems at stake convergence towards a unique result is somewhat of a “wishful thinking”. In view of the many assumptions underlying the estimate of the overall energy expenditure (di Prampero et al., J. Exp. Biol. 208: 2809 – 2816, 2005; Osgnach et al., Med. Sci. Sports Exer. 42:170 – 178, 2010), as well as of the technological limits of nowadays GPS data and of the manual corrections that video match analysis inevitably requires, the fact that the observed maximal differences among the three systems did not exceed 10 % is indeed quite satisfactory.

The trinary code is the code of the three,

to the good men it was given by me,

because I am three, or rather are we?