Metabolic Power: the issue of subjectivity

Metabolic power: is it all so simple? (part 2) 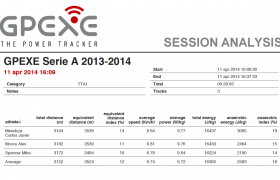 The study our group published back in 2010 reported the results obtained with the adoption of Di Prampero’s et al method (2005). On that occasion data were collected from 56 matches of the Italian Serie A (First Division) and 399 subjects were involved in the research. At that time, due to the great number of players that took part in the study, it wasn’t feasible to outline the aerobic characteristics of every single athlete. Thus, as far as the choice of power categories was concerned, it was decided to set 20 W/kg as a reasonable reference value for the “average” top-level soccer player and consider it as an important parameter to express the concept of anaerobic energy.

Anaerobic energy plays a key role in terms of individual performance analysis since it establishes a correlation between the energy demand of the exercise and the personal characteristics of every single athlete. This is an analysis that not only takes into account mechanical variables (i.e. a certain speed profile and the number and type of accelerations and decelerations) but contributes also to relate them to the energy effects they tend to induce. The evaluation of each subject’s personal characteristics may be very helpful to investigate the role of aerobic and anaerobic mechanisms, a key factor which is extremely important to fully understand the effects of the training drill and their relevance to every single player (a topic we’re going to deal with in the following article).

Why are aerobic characteristics so crucial? 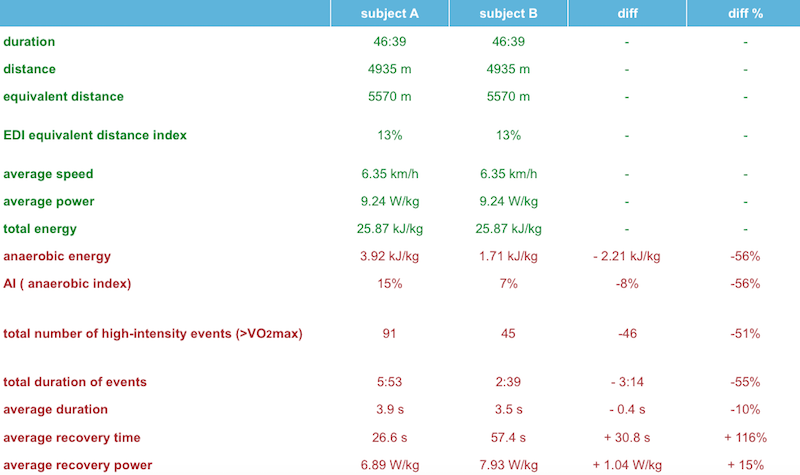 Data highlighted in green did not take into account the personal aerobic characteristics of each athlete whereas those in red are the expression of a detailed analysis which was heavily focused on the aerobic profile of the subjects. The example clearly highlights the major weakness of our 2010 study. On that occasion, indeed, we chose to set 20 W/kg as the value of maximal aerobic power and applied it to each player. Such an approach, though, allowed us to fix an average reference value which could be applied to a considerable number of athletes but was not detailed enough to give appropriate feedback on the performance of every single athlete.

Two sides of the same coin

Data in green reported in the table provide information about the effort put by athletes during a session and are not connected with the individual fitness level of each subject. The most significant ones are the following:

Data in red, on the contrary, are closely connected to the evaluation of the aerobic fitness of each player. The example illustrated in the table serves to highlight the differences between subject A and subject B in terms of aerobic performance.

For the sake of simplicity, we deliberately chose to ignore oxygen consumption in accelerated and decelerated phases and decided to tackle the issue separately in a subsequent article.

Parameters closely intertwined with each athlete’s aerobic fitness are reported below:

The approach we developed in 2010 was fairly appreciated because of its reliability in the evaluation of acceleration phases: as stated before, assessing metabolic power is very helpful to explain the changeability of energy cost in soccer, a sport characterized by the constant alternation between acceleration and deceleration phases.

As we’re going to see in details in following articles, the analysis can be furthermore improved by establishing a correlation between the individual performance of each subject and his/her peculiar characteristics.

END_OF_DOCUMENT_TOKEN_TO_BE_REPLACED

END_OF_DOCUMENT_TOKEN_TO_BE_REPLACED
We use cookies to ensure that we give you the best experience on our website. If you continue to use this site we will assume that you are happy with it.OkPrivacy policy