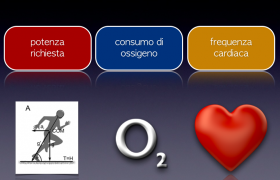 In previous papers, we focused on the importance of an analysis based on the athlete’s individual characteristics. We described a whole series of parameters that play a key role in the performance analysis of soccer players and split them into two categories: those which are independent from each athlete’s characteristics (total energy, equivalent distance index and average power) and those which are closely connected with his/her aerobic fitness (anaerobic energy, anaerobic index and high-intensity events).

Heart rate is another helpful parameter that falls into the second category and that should be monitored during training in order to obtain some feedback on the aerobic intensity levels produced during exercise. Within the same heart rate value, for instance, it is much more appropriate to focus on ball drills, rather than on sessions of dry-land training.

The linear relationship between HR and VO₂ has been widely investigated in the scientific literature. Heart rate is a reliable and effective parameter in the assessment of VO₂ values during steady-state exercises.

The discrepancy detected between relative intensities expressed both in terms of VO₂max and HRmax (figure 1) lead us to evaluate them with reference to their reserve rate, i.e. the difference appreciated between the maximum and the resting value (see figure 2). By following this approach, heart rate measurement might be taken into account as a reliable and effective parameter to assess aerobic intensity in steady-state exercises.

Nevertheless, in certain sports, soccer included, the training session is characterized by technical and tactical exercise drills during which high-intensity phases alternate randomly with the recovery process.

For simplicity’s sake, let’s break down the VO₂ formula:

In aerobic exercises performed at steady state, the stroke volume and the arteriovenous oxygen difference factors remain quite constant, thus showing how heart rate variations go hand in hand with VO₂ values. As it is clear from the above-mentioned consideration, this is the kind of situation in which heart rate might be taken into account as a reliable and adequate parameter to estimate VO₂ values.

On the contrary, in exercises characterized by a frequent alternation of low and high-intensity phases (soccer), the three factors which determine VO₂ values vary simultaneously. Thus this is the case in which heart rate cannot be set as the single parameter to estimate VO₂ variations.

The example illustrated below clarifies what we just stated: let’s assume that during the recovery phase following a high-intensity action the three factors decrease by 20%. The heart rate, the stroke volume and the A-V diff decrease to 80%.

VO₂ rates will decrease to 51.2% of the value previously detected. In this scenario, should we have taken into account heart rate as the only parameter used to estimate VO₂ values, we would have incurred in a gross miscalculation of that value. (80% vs 51%)!

The table below shows data concerning the analysis of specific exercise drills performed by a soccer player in a training session.

Detailed data on the exercise drill are a key factor to enhance performance. Once the coach has met his goals in terms of technical and tactical priorities, he/she needs to be well informed about the kind of exercises he/she proposes and the tangible results they provide. Indeed, it is of paramount importance to know how to handle exercise timing, exercise and recovery phases and the whole training session as well.

The strength and conditioning coach plays a fundamental role in this sense. As a matter of fact, he/she is able to evaluate and, if necessary, modify the training drill, thus improving the athlete’s performance. An appropriate feedback approach should be developed in order to obtain an exhaustive analysis. As the article has pointed out, there are occasions in which heart rate may be taken into great account in terms of performance analysis, whereas, in other approaches, it has to be weighed up much more carefully and associated to other parameters to help outline a more reliable evaluation and a more accurate scenario.