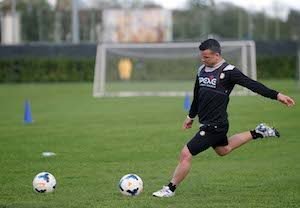 “Speaking about numbers, Giorgia, tell him that he’s the only player that in the past years did better than Tevez! ”

Sky Sport24 broadcasted a live TV report in which Antonio Di Natale (Totò), one of the best Italian striker ever, the sixth-highest goalscorer in Serie A history, was wearing our GPEXE vest. In this live interview at the Udinese Training Ground, the journalists made some joke with Di Natale who, because of the “numbers” gotten from GPEXE, he himself cannot cheat anymore ;).
Even Federico Pannoncini, at that time the Udinese Calcio fitness coach talks about how he uses some numbers, but not only: here is his interview transcript.

One of the Di Natale secrets of his success is that he has a tailor-made training just for him. How is it organized, and what can you tell us about that?

Totò follows a personal training, prepared and planned down to the smallest detail just for him. For example, today he’s just ended the speed and sprint session, and now he’s following a technical-tactical training with some specific forward role movements with coach Cinello.

During the week, he works a lot in these trainings, then he joins all his teammates for the tactical part and together, with coach, they get ready for the Sunday match.

Now he’s wearing a GPS device. Can you tell us how do these GPS works, that are becoming more and more popular on training grounds, work?

The player wears a vest and a GPS receiver device is positioned on his back. Being a piece of comfortable equipment, it allows the player to make every kind of movement. It works as any GPS, like those are supplied on cars, but this one, developed by EXELIO, a Friulian company at the leading edge of the technology field, is very peculiar because of its advanced technology: just think that this receiver works at 20 Hz and that means it can record 20 samples per each second of the player activity!

What kind of information can you get from GPEXE in practice?

The data recorded by the device, through a PC, will be sent and analyzed by a software that will engender several parameters that will give us an idea effort, intensity and volume of the performance that the player had during the training we have planned.

Did the coach Stramaccioni brought the GPS from Roma Academy to Udinese, or it was already here in use by Guidolin?

The coach Guidolin, was already using it. At Roma, we were already using a system, but when we came here and we found this cutting edge system at our disposal, we decided to embrace it totally!

In this season Udinese is doing very well, can you tell us more?

We are doing a good job, also because we the team staff we’ve found it’s really open to working, and the guys work well as a consequence.