The GPS technology might nowadays be considered as an important reference tool to carefully monitor performance analysis and, specifically, athletes’ energy expenditure. A series of studies published by Osgnach⁶ and P.E. di Prampero³·⁴ focusing on high energy demand phases maintained that a very close connection should be established between the latter and both high-speed values and acceleration phases whose energy cost has been identified to be similar to uphill running performed at a constant speed. Extreme speed variations are therefore equivalent to running on a slope in terms of energy cost.

The GPS devices’ role is to provide the technical staff with a global outline of the exercise performed by the athlete during training sessions and games. The athletic performance is analysed by evaluating two main parameters: energy cost and instantaneous speed. These two values lead to metabolic power value (w/kg), an index which expresses the instantaneous energy demand developed by the athlete on the field. On the basis of the above-mentioned assumption, it can be inferred that the higher the energy cost and speed values, the higher the metabolic power data. The polynomial equation which correlates the energy cost values with every slope percentage demonstrates that the energy cost increases significantly at the beginning of the acceleration phase when speed values are expected to be lower or at minimum. The energy cost reaches its lowest level with high and constant speed; indeed it decreases during low-intensity deceleration phases. Under no circumstances, thus, can speed and the energy cost reaches the maximum value simultaneously.

The devices automatically associate the energy cost values with GPS speed variations in order to obtain each athlete’s metabolic power data. Precision is essential for speed quantification: the GPS units should be able to record every speed variation so that the latter might be properly linked to its correspondent energy cost and affect proportionally the overall energy expenditure.

Clear limitations of the above-mentioned monitoring model are linked to the acceleration intensity developed by the athlete during exercise. Accurate measurement is fundamental in order to avoid miscalculations, especially during changes of direction which typically involve rush shifts. Nevertheless, changes of direction and significant speed variations are not peculiar characteristics of certain sports, i.e. marathon; as a matter of fact, in these cases the risk to face error measurement is definitely lower.

This is not the case of soccer, a sport in which high metabolic events tend not to exceed a speed of 16 km/h and account for 36% of the overall energy expenditure assessed in a game (⁶). Indeed, choosing high speed as the unique parameter to evaluate the athletic performance may be seriously misleading and, at the same time, methodologically incorrect. Instantaneous speed variations have to be adequately monitored and high sampling frequency devices represent the ideal tool to be exploited when faced with this condition.

The 1 Hz GPS units are not designed to cope with the specific needs of sports characterized by frequent speed variations. The accuracy of 5 and 10 Hz GPS, on the contrary, has been thoroughly investigated in ad hoc studies over the years.

In 2011 Castellano² tested 10 Hz GPS units on 15 and 30 meters distances and made a comparison between the values he obtained during measurement on the field and data he collected by means of a high-frequency camera. Evidence has shown that miscalculation (error measurement) increased from 5 to 10% as the distance decreased.

A research carried out by Petersen⁷ in 2009 seems to confirm the hypothesis formulated by Castellano and his team. Indeed, error measurement was to be detected both in 5 and 10 Hz units and, as stated before, it increased with shorter distances. Thus, the risk of errors is potentially linked to the capture frequency of each device. Moreover, only one out of nine low capture frequency units registered a minimum error of 6% in the 15 metres trials.

A study published by Jennings⁵ evaluated data collected using two devices with a sampling frequency of 5 Hz. The units were inserted in the scapula of the subjects and positioned at a distance of 25 cm. The athletes completed straight line movements (10, 20 and 40 meters) at various speeds including walking, jogging, striding and sprinting and performed also two changes of direction courses. The study involved 5 different running simulation circuits for an overall length of 140 meters

too. Dissimilarities in measurement between similar GPS units were spotted during data analysis. The issue of accuracy was also recently tackled by Akenhead¹ who maintained that if acceleration exceeds 4 m/s², the reliability of instantaneous speed values is likely to be questioned.

We tried to investigate the margin of error of 20 Hz GPS devices: the implicit assumption is that the higher the capture frequency, the lower and less significant the error occurred during measurement of short distances and high acceleration phases.

The accuracy of three 20 Hz sample frequency GPS units was carefully examined by means of a series of shuttles with the aim to check whether data recorded by the devices coincided with the actual distance measured on the field.

The shuttles covered different routes (20, 15, 10 and 5 metres) which were then repeated four times (for an overall length of 80, 60, 40 and 20 metres respectively). The path was oriented in three different directions and has been completed following an interval of an hour in order to check whether parameters like time and direction could affect data in terms of reliability. 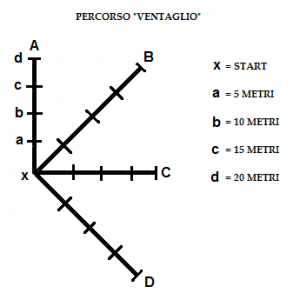 Table 1 shows the length of each path (actual distance), the distance covered by the shuttles (Shuttle x A+B+C+D) as well as that measured by the 20 Hz GPS units in two trial tests carried out following a brief interval of an hour. 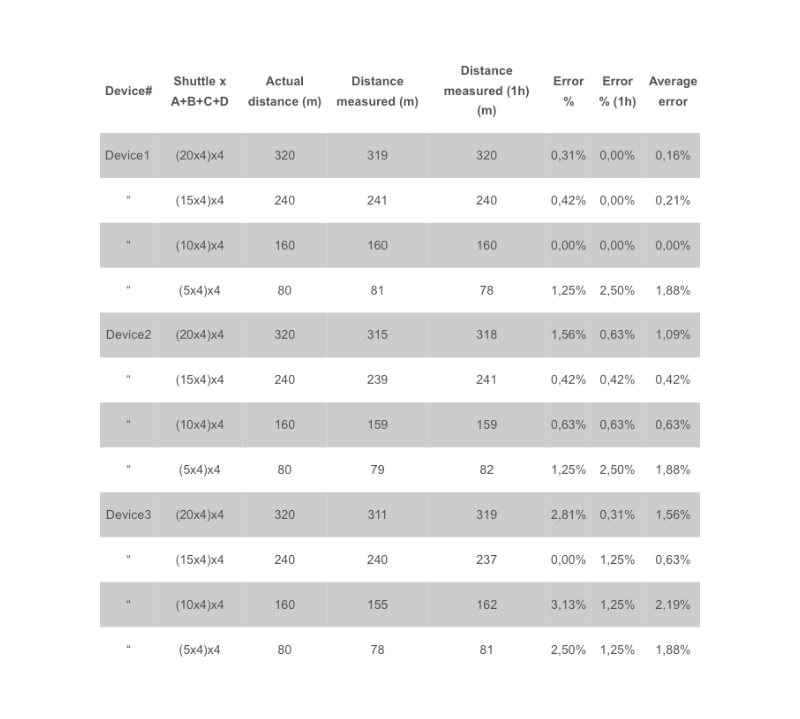 The average error the GPS units committed due to path and time capture frequency’s variations is reported in the table below.

Repetitions of the trial test following the time interval of an hour show that the maximum error occurs in shorter distances (5 metres).

While covering the 15 metres distance, the 5 Hz GPS unit reached an average error of 9.5%, a rate which decreases significantly to 0.46% with the 20 Hz device. Moreover, as stated before, data reported by Petersen⁷ suggested that, within the same route, only one out of nine devices registered a minimum error of 6%.

At the moment, no other researches which tested the GPS units on a distance of 5 meters have been carried out yet.

Each distance registered by the GPS units has been compared to the length of each path but no other control tools were used to check the actual distance covered by the subjects during the tests.

The highest acceleration value did not exceed 3 m/s²; Akenhead¹ affirms that the issue of reliability should be faced when the latter reaches 4 m/s².