An unofficial match tracked with GPEXE 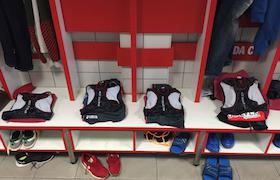 Nowadays in professional football, one of the aspects that can have great relevancy in high-level sports performance would be to know the energetic expense of a football player during a match or a training session. Thanks to the utilization of the increasingly trustworthy and accurate technology GLOBAL POSITIONING SYSTEM, (GPS) recently incorporated into the world of the football, and to several scientific studies on the energetic cost of running at constant speed and during the acceleration/deceleration phases (Osgnach, 2010), it is possible to obtain this information.

The purpose of this pilot investigation was, therefore, to compare a high sampling frequency GPS system (GPEXE PRO 18.18 Hz, Exelio, Udine, Italy) and a radar unit (ATS II 46.875 Hz, Stalker Radar, Plano, Texas, USA) during maximal straight-line sprints with the aim of examining the differences between these two devices in estimating peak speed and peak acceleration.

The aim of this study was to investigate the energetic expenditure of elite football players during a match and to assess the contribution of the aerobic and anaerobic energy sources to the overall energy expenditure in football matches.

The measures were realized by a last technology GPS device (GPEXE) placed inside a special jacket on the back of the athlete. The GPS device uses a 20Hz technology and detects the position, speed and movements of the athlete with very high precision in the horizontal plane. The information was gathered during an un-official football match (2 halves of 45 minutes each). The information extracted from the GPS was analyzed by the software provided by the brand (GPEXE), in which every subject is identified by an individual updated profile reporting mass and anaerobic individual threshold (estimated by means of specific physical tests). From these data, the software estimates the energetic expenditure (kcal/kg, kJ/kg or ml O2/kg) as well as the percentage (%) of energy obtained by the aerobic and anaerobic energetic sources.

For this study, the unit of energetic measure was kcal/kg.

The energy per unit of time, required to perform any given physical activity is defined Metabolic Power; it is expressed in W kg-1; it is an indicator of internal load, expressed and refers to the immediate energetic cost of every action. Metabolic Power takes into account the energy needed to run at constant speed as well as the additional energy expenditure (over and above that required to run at constant speed) due to the acceleration and deceleration phases. Professor Pietro di Prampero develops this topic since 2005 by several studies according to which the acceleration on flat terrain is equivalent, from the energetic point of view to running uphill at constant speed, with a slope proportional to the forward acceleration. Since the energetic cost of the running uphill is known, it is, therefore, possible to estimate the energetic cost of the accelerations on flat terrain, with a special algorithm, provided that the speed, and hence the corresponding acceleration, is known. Furthermore, the product of the instantaneous speed and the corresponding energy cost yields the instantaneous metabolic power generated by the subject. It is, therefore, possible to obtain a set of data, such as distance covered, overall energy expenditure, average metabolic power, etc. that summarises the real physical effort over any given selected time period. (di Prampero 2005, Osgnach 2010).

In addition, if the anaerobic specific threshold of every subject (obtained by physical test) is known and expressed in metabolic power (W/kg), it is possible to estimate the % of energy derived from anaerobic or aerobic energy sources, thus yielding useful information not only about the total quantity of immediate energy needed in every action (constant speed run or accelerations) but also the fraction of the total energy or power that comes from each of the energetic routes mentioned above.

The estimated average energy expenditure in a football match over 45 minutes was 545.49 kcal (SD: 53.32). A statistically significant (p<0.05) different energetic expense per kg depending on the player role was demonstrated by ANOVA test, being 6.17 kcal/kg (SD: 0.28) lower for the midfielders and 7.15 kcal/kg (SD: 0.61) higher for the wingers.

However, the overall energy spent, as given by the product of theses specific energy expenditures (kcal/kg) and the mass of the subjects (kg) did not show any statistically significant differences among the players’ roles (P=0.099).

The average energetic expense for a football player in 45 minutes of game was 545.49 kcal, being slightly greater for wingers, even if the estimate of total energy (total kcal) when the subject’s body mass is taken into account turns out to be similar for all the players independently of their position, with a standard deviation of ±53.32 (P=0.099).