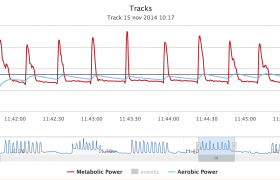 In a recent article, we tackled the issue of performance analysis and discussed its importance as an extremely useful tool to monitor exercise during training and matches. In particular, we observe that for a given performance level some parameters (overall energy expenditure, equivalent distance index) are independent of the players’ aerobic fitness, whereas others depend on it. We then proceeded to set up a reference model to describe the anaerobic demand of each athlete on the basis of his maximal aerobic power (VO2 max). For this purpose, we carried out a detailed analysis of the following parameters:

For the sake of simplicity, we chose to consider as anaerobic energy the area included between the instantaneous metabolic curve and the players’ anaerobic threshold (the green area in Figure 1).

Figure 1 shows that the above holds true when the actual VO2 (shown in light blue) is close to the anaerobic threshold (AT-grey line) i.e. at the end of the exercise. However, this does not apply to the initial phase of the exercise, since at that moment the actual VO2 is far from the AT.

AT vs instantaneous VO2 value: an evaluation of aerobic and anaerobic demand

The parameters we decided to set as a reference point in terms of anaerobic demand are likely to vary substantially with AT and VO2 values. The anaerobic energy increases substantially when the instantaneous VO2 is lower than AT; as highlighted in pink in figure 2, this is obtained by calculating the difference between the VO2 and AT time integrals.

The estimate of the actual VO2 value is very important, since it may lead to an analytical identification of high-intensity phases. The energy developed through anaerobic mechanisms (i.e. the oxygen debt in pink in figure 3) could provide the team with data regarding the general trend of the performance. As a matter of fact, in these phases, the energy demand (the red line in the graph) is higher than the actual VO2 value (shown in blue).

Nevertheless, a much more accurate analysis has to be carried out to evaluate the metabolic features of the exercise.  Indeed, during recovery phases (highlighted in grey in figure 3), the energy demand decreases as the actual Vo2 value increases enabling a partial or complete replenishment of ATP and phosphocreatine (CP) reserves. 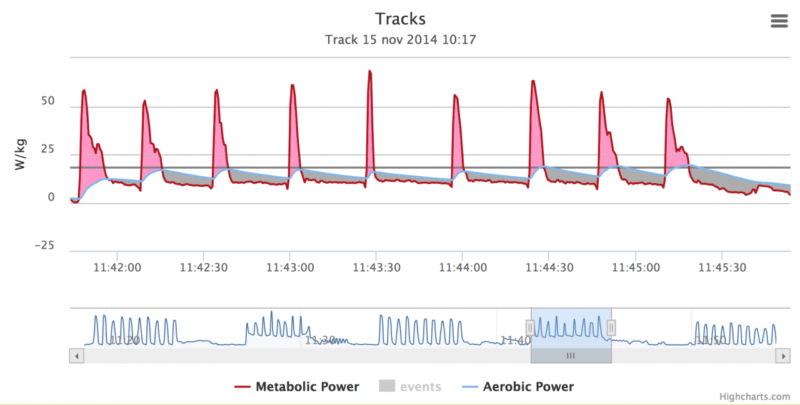 Distinctive features of the exercise

Exercise drills in soccer are known to be generally characterized by high-intensity phases during which aerobic power increases followed by low-intensity peaks meant for recovery.

Interval training might be imposed systematically as in dry-land sessions, whose main characteristic is the detailed and pre-determined planning of intensity phases as well as exercise and recovery timing. Otherwise, it may be obtained randomly:  this is typically the case of ball drills, a kind of exercise where several factors (among which the most important are phases of play, distances, rules and the number of players involved in the session) play an extremely crucial role.

In both cases the high-intensity/recovery phases ratio is going to provide us with feedback in terms of information on the aerobic performance, the latter being data of paramount importance to assess the actual effectiveness of the training drill.

As a matter of fact, such an analysis is carried out in order to create a synergy between the exercise drills proposed and the goals, in terms of metabolic features, the athletes are expected to strive toward.

In dry-land sessions aerobic and SAQ (speed-agility-quickness), exercises should be carefully monitored. As far as aerobic exercises are concerned, the most important aspect to be taken into account is clearly linked to the aerobic power level developed during activity. Indeed, high-intensity and recovery phases, as well as the overall duration of the exercise, should be adequately related to the aerobic features they intend to reach.

A SAQ training session should be properly supervised so that the maximal intensity developed during active phases and recovery stages might be properly monitored. Indeed, recovery phases are likely to determine the aerobic features induced by exercise (pure speed = total recovery, lactacid = partial recovery).

Ball drills have to be adequately evaluated as well.

Priority should be primarily given to complete fulfilment of the technical-tactical task since, in this specific case, metabolic values depend from different factors which may be analytically codified or logically investigated by the trainer.

The main issue to be tackled concerns the metabolic load of exercise and a balanced distribution of the workload over the week. The above-mentioned analysis may encourage teamwork and provide the technical staff with new ideas to be tested on the field (within the same athletic load, for instance, some dry-land sessions could be even replaced by specific ball drills).

This is a topic which needs to be adequately explored so that new training hypotheses may be put forward. So…come on, get involved and help us: suggestions, criticism and proposals are indeed welcome.