“Is the Metabolic Power really understood?”
An interview with Professor di Prampero to explain some topics about this approach

Often the meaning of metabolic power and oxygen consumption are misinterpreted: can we refresh these concepts? 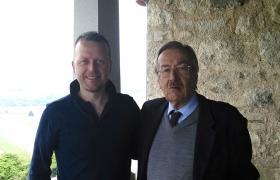 The product of the instantaneous velocity (v, m⋅s⁻¹) and the corresponding energy cost per unit body mass and distance (Cr, J⋅kg⁻¹⋅m⁻¹), as obtained from the acceleration (and hence the equivalent slope), yields the instantaneous metabolic power (Ė, W⋅kg⁻¹) necessary to run at the speed in question:

As such, metabolic power is a measure of the overall amount of energy required, per unit of time, to reconstitute the ATP utilized for work performance. On the contrary, the actual oxygen consumption (V̇O₂), at any given time may be equal, greater, or smaller than the metabolic power itself.

So they could be different depending on the intensities change…

These considerations show that, at variance with typical “square wave” aerobic exercises in which case, after about 3 minutes, actual V̇O₂ and metabolic power coincide, the characteristics of soccer, as well as of many other team sports, are such that, in the great majority of instances, the time course of V̇O₂ is markedly different than that of metabolic power requirement. Hence, at any given time during an exercise in the course of which the intensity (metabolic power) changes randomly (Figure 1), the actual V̇O₂ can be smaller, equal or greater than the instantaneous power, depending on: 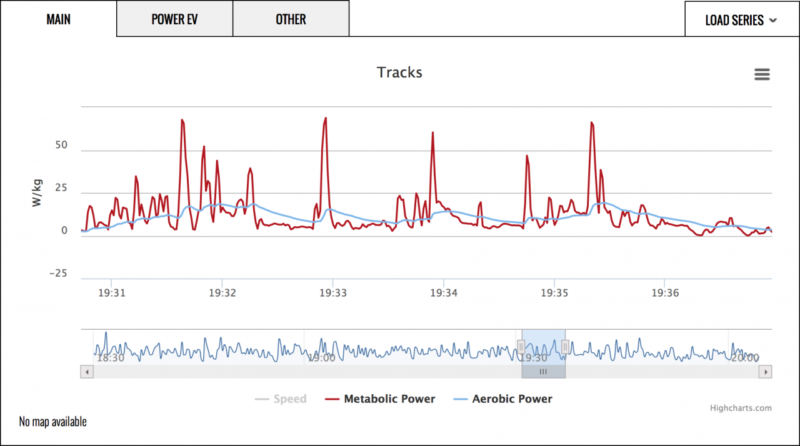 As discussed in some detail elsewhere (di Prampero, Botter, Osgnach, 2015), knowledge of the time course of the metabolic power requirement allows one to estimate the corresponding time course of V̇O₂, assuming a mean time constant of the V̇O₂ kinetics during metabolic transients, as from literature data, and on the basis of the individual V̇O₂max. The so obtained estimated V̇O₂ values turned out to be essentially equal to the actually measured ones in a group of 9 subjects who performed a series of shuttle runs over 25 m distance in 5 s. Each bout was immediately followed by an equal run in the opposite direction (again 25 m in 5 s). A 20 seconds interval was interposed between any two bouts, and the whole cycle was repeated 10 times (for a total running distance of 500 m). The running speed was continuously monitored by a radar system, the corresponding instantaneous acceleration, energy cost and metabolic power were then calculated by means of the same set of equations as implemented in the GPEXE ©. The overall actual cumulated VO₂, obtained as described in detail in the paper, was then compared to the values obtained by means of a portable metabolic cart wore by the subject (K4, Cosmed, Rome, Italy), allowing us to assess the actual O₂ consumption on a single breath basis.

The so obtained data are represented for a typical subject in Figure 2 which reports the time integral of: 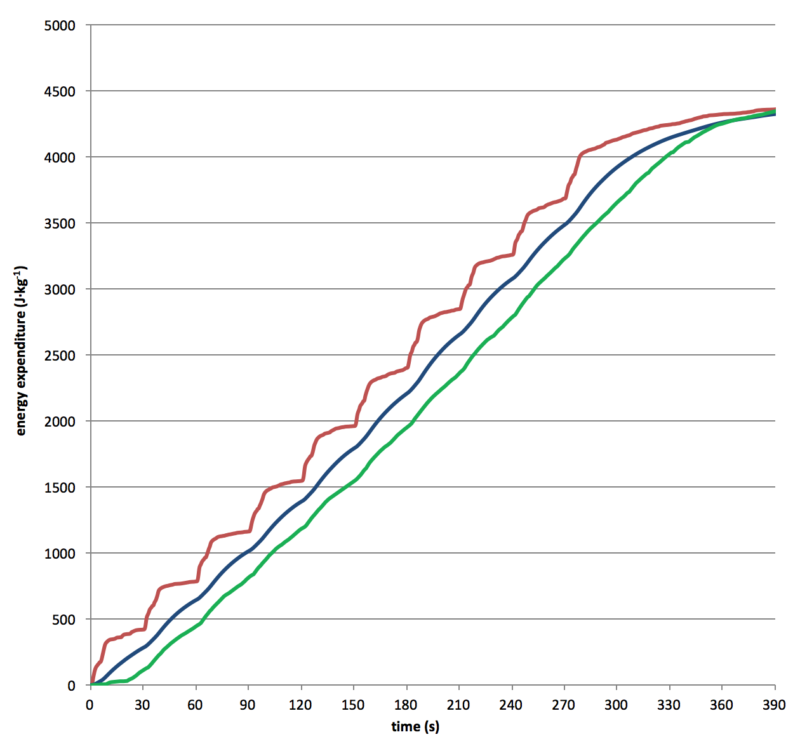 Inspection of this figure shows that:

In a recent paper published on Int J Sports Med, Buchheit et at. report a large underestimate of the metabolic power calculation via GPS as compared to the actual oxygen consumption measures: what is your opinion about it?

The previous excursus lends experimental support to the theoretical approach briefly described above and discussed in detail by di Prampero et al. (2015); even if the recent paper by Buchheit et al. (2015) seems to report contradictory data. It must be pointed out, however, that an analysis of Figure 2 of this paper (reproduced for convenience below as Figure 3) highlights some doubtful aspects, as follows: 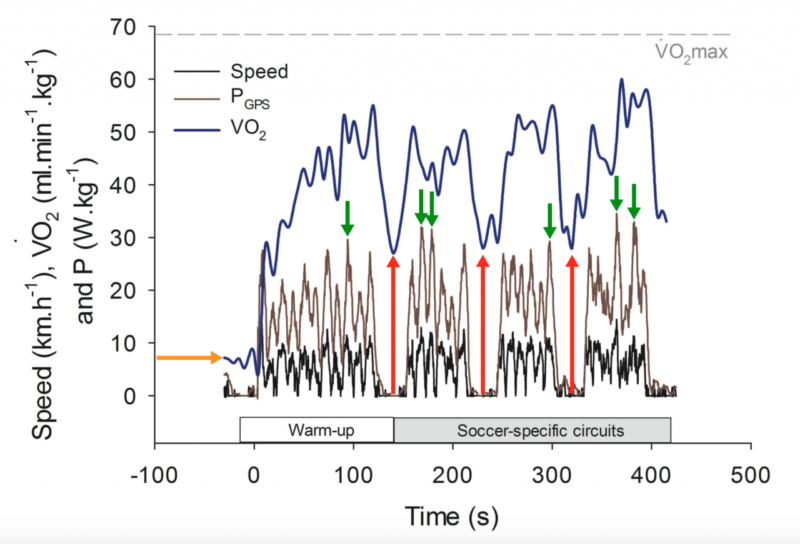 Figure 3: This figure is reproduced from Figure 2 of Buchheit et al. paper. See text for the meaning of the coloured arrows.

Is there anything else that could help us in understanding these topics?

Even so, a graphical analysis derived from Buchheit et al. Figure 3, along the lines of the above-reported Figure 1, shows that at the end of the time period (500 s), overall cumulated VO₂ was only about 12 % less than the overall time integral of the metabolic power.

These considerations are reported graphically in Figure 4, as follows: 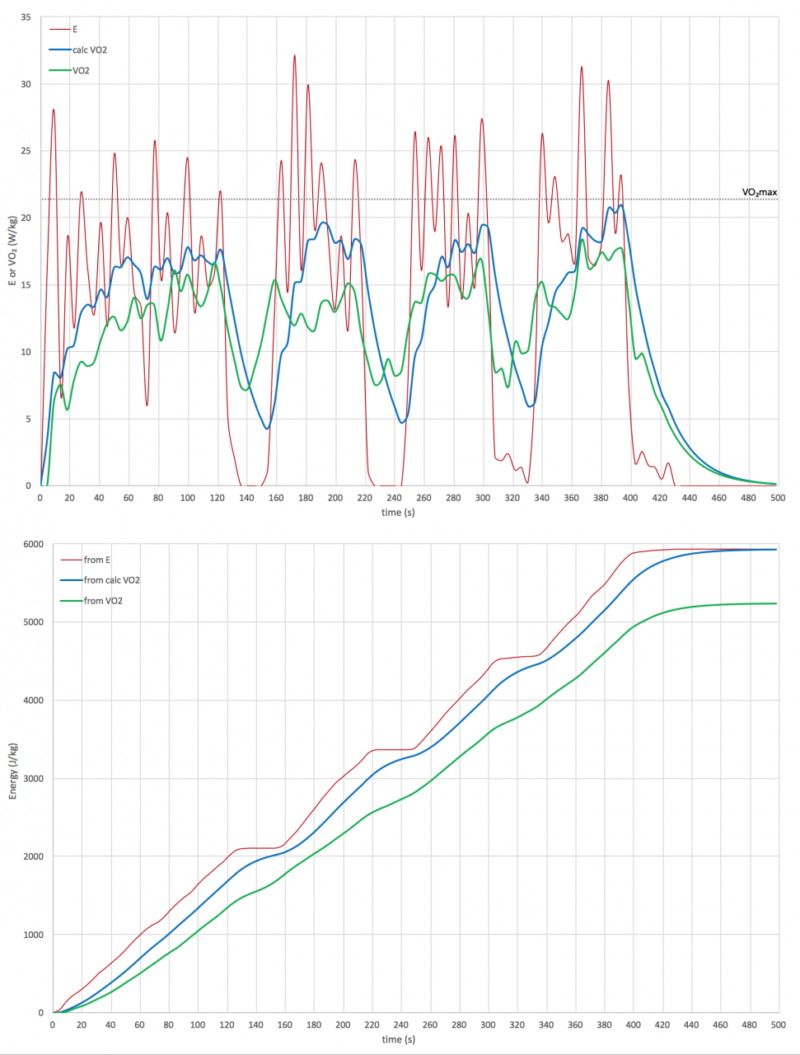 We are therefore convinced that, if allowance is made for the uncertainties involved in the precise estimate of the individual energy cost of running (see below), of V̇O₂max, and of the necessary correction for the resting V̇O₂, the approach outlined above yields meaningful results as concerns the time course of the instantaneous metabolic power and of the actual V̇O₂ and of the corresponding time integrals (i.e. overall energy expenditure and overall cumulated VO₂).

Finally, we would like to point out that the upper panel of Figure 4 closely resembles the original (Buchheit at al., Figure 2). However, the comparison between the next figure of Buchheit et al. paper (Figure 5, left panel) with the one derived from our Figure 4 (Figure 5, right panel) leads to a markedly different picture than reported in the original paper. Indeed, the right panel of Figure 5 reports the average values of metabolic power (white), estimated (grey) and measured (black) V̇O₂ and shows that:

This shows that, as can be expected from textbook physiology, the actual V̇O₂ kinetics follows the power requirement with a well defined time lag and, conversely, that a substantial repayment of the oxygen debt necessarily occurs in recovery after exercise. Thus, even if the above data were obtained from a graphical analysis of the original Figure 2, and as such, they should be taken with caution, the emerging picture yields a more convincing energetic summary of soccer-specific circuits.

…But each player is different, especially in the economy of movement on the pitch: how does the energy cost affect metabolic power estimates?

It should also be pointed out that, apart from the inter-individual variability of C₀, its value depends also on the type of terrain (e.g.: artificial vs. natural grass, compact vs. soft surface, etc.), so that once again, its numerical value must be selected with a pinch of salt. Furthermore, it should also be stressed that, as mentioned above, C₀ applies to constant speed running on flat terrain, thus neglecting backwards running, running with or without the ball, as well as any sudden changes of direction, thus inevitably introducing a certain degree of uncertainty. However, at the present stage, among the clear-cut scientific data available in the literature, none allow one to take into account with reasonable accuracy this state of affairs. As such, rather than relying on dubious corrections and assumptions, we deem it advisable to live with this uncertainty, inevitably built in the system’s algorithms.

…And what happens when the player accelerates at his maximum?

Another point to be considered when dealing with the energy cost of running is the fact that the equivalence between accelerated/decelerated and uphill/downhill running is based on the data obtained by Minetti et al. (2002) in a range of inclines between – 0.45 and + 0.45. For inclines outside this range, our approach relies on linear extrapolations of Minetti et al.’s data, rather than on the authors’ polynomial equation which, obviously enough, can not be extended beyond the experimental range of observations. However, the occurrence of such high values of acceleration/deceleration is rather infrequent so that this approximation cannot be expected to lead to any substantial errors.

However, the limits of metabolic power assessment must be known: can we analyse them together?

We discussed the calculations, advantages and limits of the approach. Did we forget the other side of the coin?

Concerning the model, we strongly support its general validity, albeit within the limits discussed above. We also would like to stress that the technology for data collection must be appropriately selected: since we deal with accelerations, any sampling frequency below 10 Hz is highly questionable. In addition, also the filtering of the signal to smooth the accelerations/decelerations of the centre of mass synchronous with the stride frequency must be considered in order to reduce the noise, without losing information. Finally, the often proposed utilization of mechanical quantities obtained by inertial sensors is dubious, because of the absence, so far, of any convincing experimental data linking the observed mechanical variables with the corresponding energy expenditure.