How to detect the high intensity 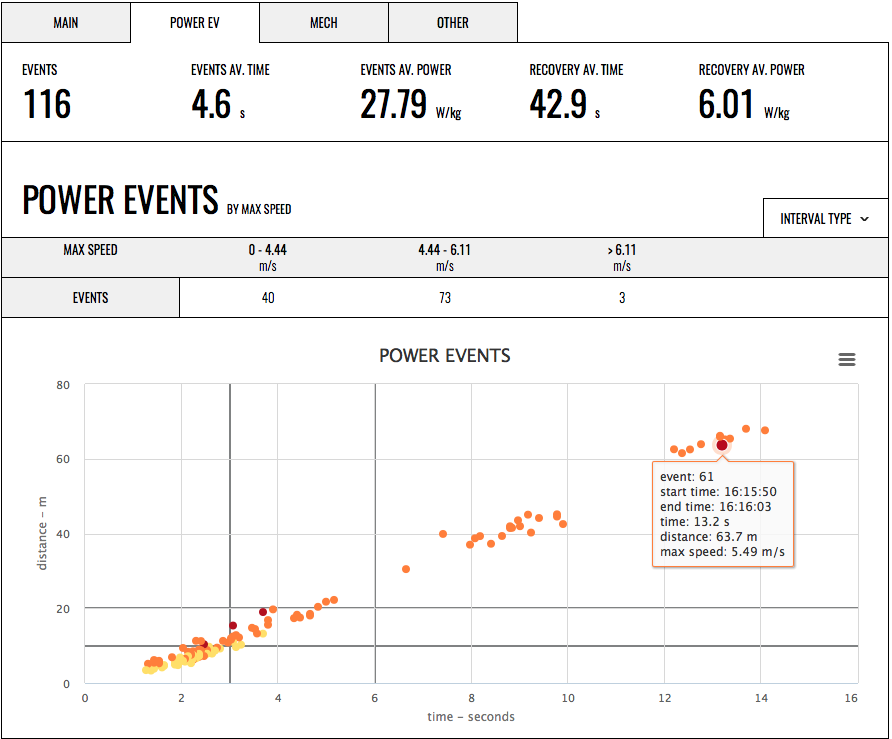 Player tracking technology has given the coach the opportunity to quantify players’ activity during training sessions and official matches. At the end of physical work it’s quite easy to get in a few minutes the average values of the main parameters:

Average values, although interesting, can give only “general” information on what the athlete did on the pitch and do not help the coach to analyze the players’ effort. For this reason (and also to get some “coach-friendly data”) there is an increasing interest in describing high intensity efforts.

High-intensity activities can be identified and summarized as follows:

The aim of the paragraphs that follow is to analyze advantages and limits in the use of different parameters to arrive at a complete picture of the best criteria to describe high-intensity efforts.

During these five minutes of an official match, the athlete runs 684 meters at an average speed of 8.21 km⋅h-1 . The time course of the speed is reported in figure 1 where we set a speed threshold of 19 km⋅h-1. We can easily detect the time windows in which the speed exceeded this threshold and summarize the total activity above it.

Table 1 is simply the sum of all actions (event) in which the speed exceeded 19 km⋅h-1. For example, in the event #1 (see figure 1) the athlete ran for 14 meters at a speed above the threshold with a corresponding energy expenditure of 64 J⋅kg-1 (figure 2-left and table 2).

This representation is legitimate, however, it leaves the following basic questions unanswered:

The answer to the first two questions is contained in the following paragraph (“acceleration”) whereas the response to the last question… is rather difficult! Indeed, it’s hard to find convincing reasons helping us to make a decision because apparently there isn’t a specific speed above which something happens, and also, it makes little sense to use the same threshold for athletes with different abilities in expressing high-speed.

It’s well known that accelerated running (essential to increase the athlete’s kinetic energy) is a very expensive activity both from a metabolic and a muscular point of view. Many team sports, such as soccer, are carried out by repetitive changes of speed and, even if the athlete may not reach high speeds, the impact of the resulting accelerations/decelerations can’t be neglected. As previously mentioned, the energy cost during acceleration can increase considerably as compared to constant speed running; therefore, the effect of considering “high intensity” only high-speed running is simplistic. Inspection of figure 2-right and table 2 makes it easy to understand how things are going: the acceleration phase has a double energy expenditure as compared to the phase of high speed running (101 vs. 64 J⋅kg-1) even if the athlete covered a lesser distance (11 vs. 14 m).

However, even when trying to detect “high intensity” via acceleration, the scenario is similar to the previous one: how can we choose a meaningful acceleration threshold?

A final consideration on this topic: whereas we generally use relative units when dealing with endurance activities (% of maximal heart rate, % of maximal oxygen consumption, …), it seems funny to base our analyses of high intensity speeds or accelerations, on the fixed threshold. Indeed, consider as an example the individual force-velocity-power profile of a maximal sprint (figure 4) [3]; it turns out that:

Recently a new approach has emerged that incorporate both speed and acceleration to determine metabolic power during accelerated running [1]. Metabolic power, which is the product of the instantaneous velocity and the corresponding energy cost, is a measure of the overall amount of energy required, per unit of time, to reconstitute the ATP utilized for work performance. It can be easily calculated at any given moment and any speed changes have a 2-fold effect: on one hand, because of the direct role of speed in setting metabolic power, and on the other, because the resulting acceleration increases (or decreases) the energy cost in proportion to the amplitude of acceleration (or deceleration). 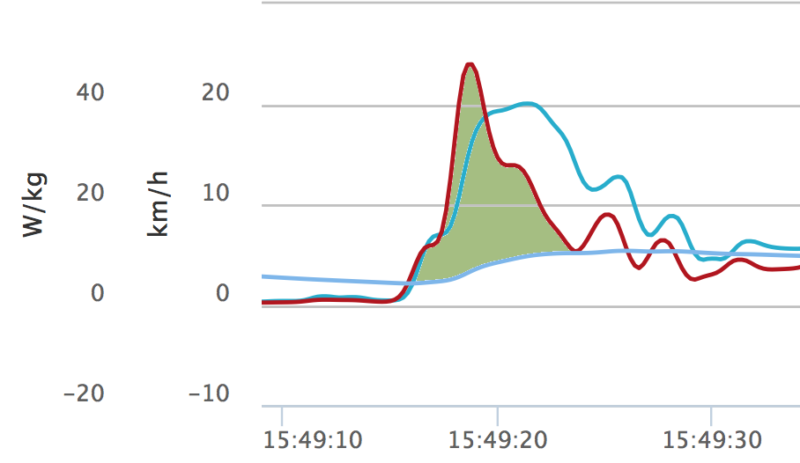 From table 2, if we merge the high speed phase and the acceleration phase, we get an overall event of 25 m with an energy expenditure of 165 J⋅kg-1. We would like to stress that, when this same high intensity event is analyzed on the basis of the metabolic power, instead as separately from speed and acceleration (see figure 7), the obtained result is essentially equal (24 m with an energy expenditure of 153 J⋅kg -1). This strongly supports the use of metabolic power as a comprehensive high intensity index.

There are other evaluations concerning the energy balance of the selected period (aerobic, anaerobic alactic and anaerobic lactic energy) as well as the instantaneous availability of ATP-CP storages that could be monitored by the live application… but this is another story!

Whilst further improvements are needed to describe high intensity in team sports, metabolic power is one of the most convincing parameters that coaches can use to summarize the effort of their players. Speed and acceleration, although able to provide some information, have several weaknesses: the standard to set a critical threshold is not clear, furthermore, these thresholds fail to comprehensively isolate the high intensity activities. The metabolic power approach appears the best solution for managing workloads and, since it is based on energy expenditure estimates, it seems to be also suitable for assessing the balance between work and recovery.

However, besides the metabolic effort, the players have to “bear” also another type of “burden”: the mechanical load of the active muscle mass. This topic deserves a special analysis since it’s as important as the metabolic approach. Unfortunately, we have to postpone this argument to a future episode!