Something explained again and something new about our
energetic approach

Some recent papers dealt rather critically with our metabolic power (MP) approach, as previously discussed also in this interview to prof. di Prampero. We think that this is partly due to the fact that the MP concept is not fully understood, probably also because of our failure to make things clear.

Therefore, now is the time to put our foot on the floor and drive forward to better inform you guys!

Metabolic Power provides a more comprehensive estimate of accelerated running when compared to displacement or accelerometry approaches, but does not claim to estimate the energy cost of non-locomotor activity. In addition, it has been made explicit in all good quality Metabolic Power papers that it is assumed that all locomotion is in a forward direction. Ironically, even though this is also an underlying assumption of all papers that use displacement measures, it is rarely acknowledged.

Again, Metabolic Power represents an improvement on existing measures for estimating energy expenditure in intermittent speed activity, but it does not – and does not claim to – account for all movement costs.

We would like to get this message out to other scientists so that they realise that, whilst not perfect, and certainly capable of refinement, Metabolic Power is better than established procedures for assessing the energetic demands in team sport competition.

2. MP permits a great assessment of the high intensity in “intermittent speed sports”

Many people are still using speed zones to evaluate the high intensity of the performance. They set a threshold, standard for all the players or on an individual basis, and they monitor the time spent or the distance covered above this threshold. But they are not considering the accelerations and decelerations that contribute greatly to the energy cost.

In some cases, they count the acceleration events above a threshold, but in this case, they are not considering the speed related to these events. So, for example, they count one event above 2m⋅s⁻² starting from walking speed and the count as well one event above the same threshold of 2m⋅s⁻² but starting from running speed, even if they are two totally different events (which one is more expensive?!).

Instead, MP takes into account both speed and acceleration and permits to better evaluate the high-intensity actions. See this article for more details.

Furthermore, we can provide the performance analysis based on the MP and an individual threshold (VO2 max) with a physiological meaning, using non-arbitrary thresholds. See this article and this article for more details.

Another story is related to those who are using heart rate monitoring to evaluate the high intensity in intermittent work, but we already spoke about that in this article.

3. The quality of the data makes the difference

Some papers present a lot of numbers about metabolic power overlooking the processes leading to the final data. Is the raw data really accurate? If they were using a GPS system, how was the signal quality at that time in that place? Were there some obstacles that could disrupt the data?

And what about the sample rate? Using a 20Hz sample rate is different from using a 5Hz sample rate! Is anyone considering that? See also this article about the 20Hz reliability of the GPEXE device. But using a device with a higher sample rate means that you will have more data and it does not always mean that you’ll have greater accuracy! The accuracy of the signal depends on many factors in the device project: the antenna characteristics and his orientation, the noise produced by the motherboard,… And the human locomotion does not need to be tracked over a certain sample rate frequency (20Hz?) or you’ll only see the same data in many consecutive timestamps.

At last, but not least, how do they filter the signal? We know that for the metabolic power calculation, we need to filter the speed to remove the intra-step acceleration/deceleration contribution, but we can’t filter too much to avoid losing information. A little change in the filtering parameters can change substantially the final results.

So there are metabolic power “numbers” with different reliability depending on those variables. And if you see MP peaks that even Bolt can not reach (his peak is about 160 W/kg), as we have seen in a recent paper, you should have some doubts…

4. How you calculate the MP makes the difference

In the metabolic power calculation there are some steps not defined in detail, and how you manage these steps makes the difference. Some examples…

The calculation uses the Minetti equation, but it works only in a specific range of equivalent slopes. How do you manage the calculation outside this range? 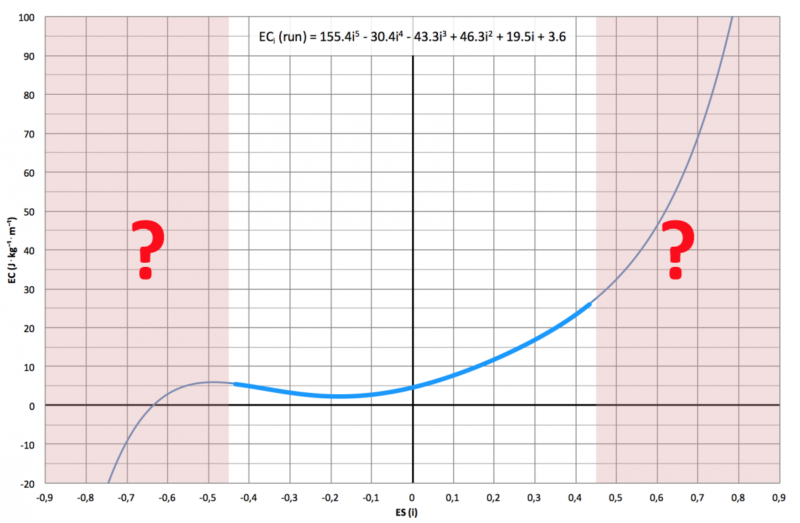 Are you considering the air resistance? We have recently added the “air effect” in our calculation. See point 5.

And what about applying a different energy cost depending on the running direction? We are going to add also this feature (see point 7). So we’ll overcome the assumption of the forward running and we’ll be able to provide a more accurate estimate.

Again, there are metabolic power “numbers” with different reliability depending on those variables.

5. MP should consider the air resistance

The air resistance helps you to brake – and you will spend less energy – and brakes you running at high speed – and you will spend more energy. You have to consider that in the energetic approach. There are not big differences but there are differences, especially in the power peak values. See in the picture the difference between MP considering the air resistance (red line) or not (green dashed line), higher when the speed (blue line) increases. 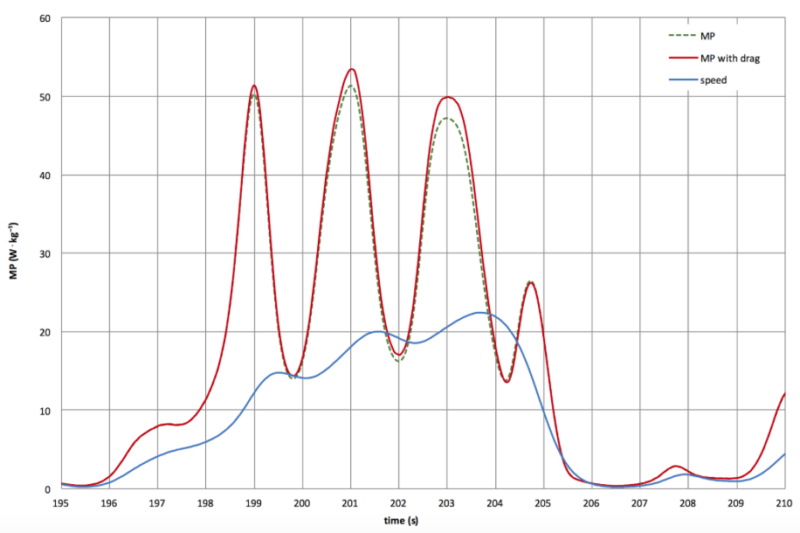 6. MP should differentiate walking from running

Some papers, even if containing some mistakes and hasty conclusions, gave us good insights to improve our approach. It’s true that during the walking activity, using the standard calculation, the energy expenditure is overestimated. Therefore we have recently differentiated walking from running applying a different energy cost. Another step forward! 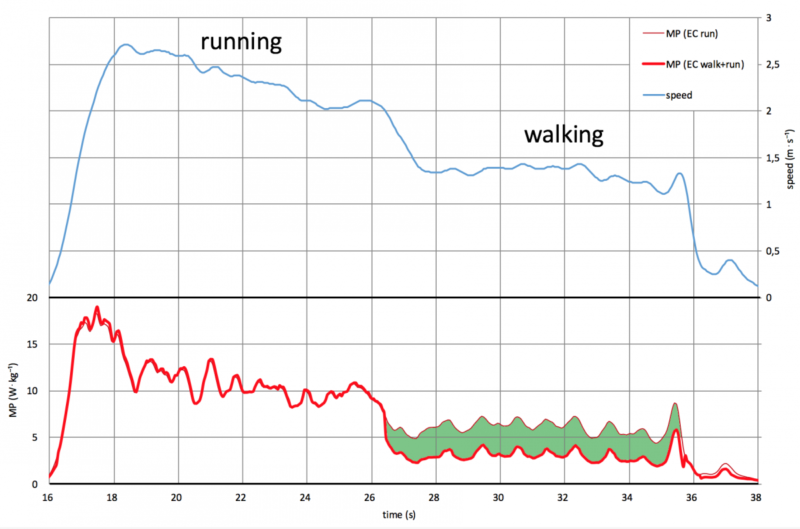 7. MP should consider the running direction

Using the magnetometer data, together with the GPS data, we are already able to detect the running direction of the player (forward, backward, lateral). The next step will be applying a different energy cost depending on the running direction. It’s not so simple studying the energy cost of the lateral and backward running but someone already did it and we’ll work on it again. Another improvement is up to come! 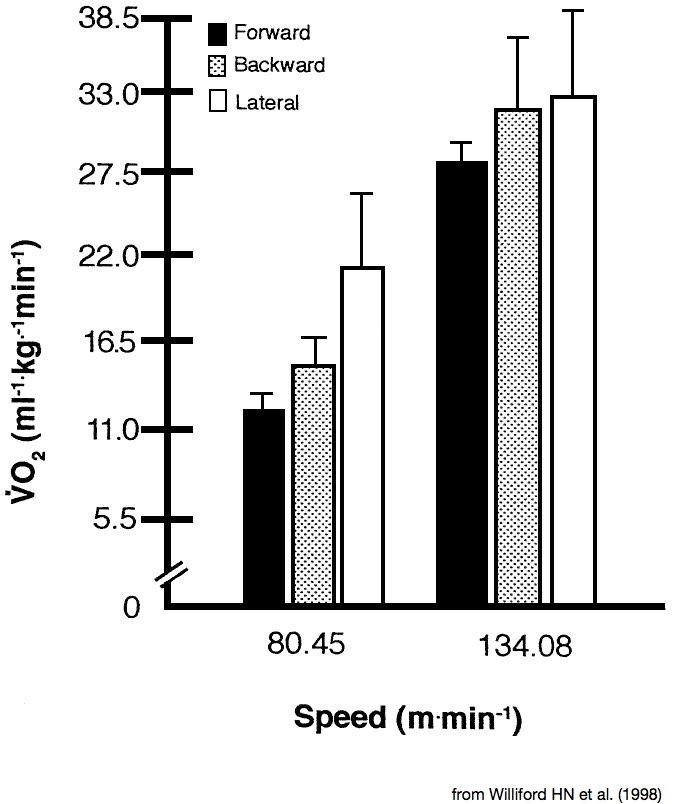 8. MP wants to be simple to handle

Some people ask us: “ok guys, well done, but do you consider that each athlete has an individual energy cost of running?” or “do you consider the condition of the pitch and the different energy cost depending on that?”. They are right. We could manage also these variables but the game is not worth the candle. We want to keep MP simple to handle. The user can’t spend time to measure and to set the individual energy cost or to measure and set the terrain condition day by day, getting small differences from the data depending on that.

Sometimes, the same people, use a “shaking index” based on the accelerometer data, not considering that, also in this case there is no relationship with the individual energy cost or with the condition of the pitch!

What about non-locomotor activity? Our assumption is that MP does not claim to estimate the energy cost of non-locomotor activity. We can use other parameters based on the inertial unit to count some specific events, for example, the jumps or the rugby collisions, to integrate the performance report. In this case, the challenge is, first of all defining the event on a mathematical basis, then using the sensors data to detect with accuracy the event.

Another story is, not only detecting the event but also applying it a specific energy cost to integrate the MP calculation. This is more than a big challenge and the reason for the question mark in the title.

Close inspection of the energy cost data shows that the effects of accelerated versus decelerated running are markedly asymmetrical. Indeed, for any given acceleration or deceleration value, the energy cost of running per unit of distance is 3 to 5 times larger during acceleration. However, because of the markedly different mechanical characteristics of concentric (or positive) versus eccentric (or negative) work, the mechanical load per unit of active muscle mass is likely largely asymmetrical in the opposite sense: the deceleration phases being much more costly from the mechanical point of view than the acceleration ones.

We are now in the process of analysing in some detail the time course of the mechanical power during the acceleration and deceleration phases of a standardised soccer drill. This ought to allow us to estimate the corresponding mechanical loads per unit of active muscle, thus making possible a meaningful comparison between the two conditions.

In a nutshell, we expected on theoretical grounds that, during deceleration, other things being equal, the mechanical load is substantially larger than during acceleration. Since, as is well known, a large fraction of muscle injuries occur during deceleration, our final aim is to propose a quantitative individual load threshold index, with the aim of reducing the occurrence of these unpleasant events.