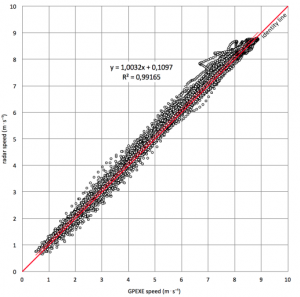 In recent years the use of tracking systems has become widespread in team sports monitoring. The technology in this field improved rapidly, the costs have become affordable and the researchers have investigated various aspects of this topic, highlighting the advantages and the limits of these systems. One of the most common of them is the Global Navigation Satellite System receiver (commonly referred to simply as a GPS) which allow to receive informations from satellites and calculate position and speed.

The research in this field was initially focused on the total distance covered (assuming that this was related to the overall energy expenditure of the player); a little later, the distance covered in different speed categories was addressed (assuming that the higher was the speed, the greater would be the intensity). To this end, 5 Hz and 10 Hz units provided a sufficient accuracy in order to calculate the parameters mentioned above.
More recently, as this approach fails to account for the demands of changing in speed (i.e. a greater energy consumption for accelerations and a greater muscular load for decelerations), the validity and reliability of the acceleration data obtained from GPS has become crucial. 10 Hz units offer a better accuracy to quantify accelerations/decelerations but it is not entirely clear whether the results can be considered satisfactory under all conditions (e.g. maximal speed, sudden changes of direction, etc…).

8 trained males (soccer and rugby players) were involved in this study. Each subject completed a different number of bouts on three distances (e.g. 20, 30 and 40 meters) for a total of 65 sprints (all subjects included) (12 trials were discarded due to technical troubles with both tools):

The following steps were required to compare the two devices at the same sampling frequency:

The raw speed signal was filtered with a specific designed algorithm (property of Exelio, Udine, Italy) operating at the original sampling frequency of each device (i.e. 18.18 Hz and 46.875 Hz for the GPEXE PRO and the Stalker ATS II, respectively), see figure 1;

the radar’s filtered speed was down-sampled at the same sampling frequency of the GPS (the reverse process would have required to “construct” several additional samples!), see figure 2;

the time course of the filtered speed from both systems was synchronized by using a Root Mean Square Deviation algorithm (RMSD); the radar shows a speed offset at the beginning and at the end of the sprint (≈ 0.5 m⋅s-1, see blue arrows in figure 2) even if the subject started from and finished at a still position; the RMSD synchronization was needed because it was not possible to determine the exact start of the test and, as a consequence, only the data between dashed blue lines were considered, see figure 3;

the acceleration was calculated from the filtered speed of each device, see figure 4;

The parameters that follow were calculated as described below and are reported in figure 5:

The average values (± SD) of all variables described above are reported in table 1:

Aim of the study: to assess the accuracy and reliability of the GPEXE to determine the time course of speed and acceleration during 20 to 40 meters straight line sprint.
Reference method: a radar system that, however, showed a marked speed offset at the beginning and at the end of each trial (see figure 2).

neglecting this perplexing speed offset, the data obtained by the two instruments are essentially superimposable (see table 1 and figure 6 and 7).

the data show that a gps with a high sampling frequency is perfectly adequate to monitor speed and acceleration during maximal linear sprints. This supports the view that the variables derived therefrom, such as the energy expenditure and metabolic power [3], as well as the individual mechanical characteristics (horizontal force, ratio of force) [4], are basically correct within the limits of the models described and discussed elsewhere [1, 2].