Prof. Alessandro Fonte, SS Lazio fitness coach since 2012 explains how he uses the gpexe system to monitor the athletes’ constancy of performance and to set up in advance loads of training thanks to the exercises database into the gpexe web app. 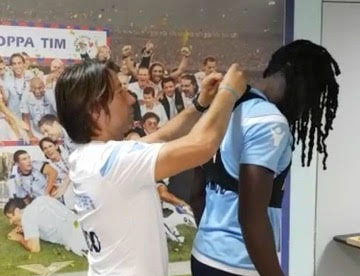 We use gpexe units every day. Last year we only excluded the sessions the day before the match, whilst this year we monitor those trainings as well because in our case they have a fair workload. Then, during the match, we use gpexe indirectly by obtaining data from video tracking. The reason why we use them in training is to control the workload for that day itself and for the short, medium and long term. This allows us not only to monitor the load but also the individual performance over time; weekly monitoring also helps us to create a training performance model.

We need to track the game too, because it should be the maximum expression of energy expenditure, and therefore we use it as a reference and as a model of physical performance. So, through the system, we create two models of performance, namely the game and the training, in order to compare them not only with the average individual values of the game but also with all the average values of all the previous sessions. We use the categories available to create, for example, performance models for high-intensity tactical exercises, or matches in tight spaces.

Over time we have selected a restricted number of parameters that the system provides us, trying to focus on those that are more useful for comparisons in future, and that gives us a better picture of what the athlete’s physical condition is at a specific moment. We consider some “general” parameters (i.e. the total distance, the equivalent distance index, the average metabolic power and the total energy) and other more oriented to describe the “high intensity” (i.e. the distance covered between 20 and 35 W/kg, the distance covered above 35 W/kg and the distance covered above 22 km/h). The reason to distinguish between high metabolic power and high speed is to understand the effort of our athletes even when the exercises are performed in small areas where high speed is not reachable.

These parameters represent our daily report that we present to the coach. In addition to this analysis, we have created an alternative database where we extract further data related to the muscular load, such as the average Active Muscle Load (AML) and the Eccentric Index (EI); in this summary, we also merge the data from the RPE questionnaire which allows us to calculate a kind of “efficiency index”. We discuss this part of the analysis with the staff only in light of unexpected results.

The main focus of our analysis is the trend over time: the single data would not tell us that much, if not compared with the individual data collected during the season.

Regarding the game, we also consider the metabolic response and we compare it with the training volume, trying to find a correlation between the two: is the workload sustained during the weekly training related to the player’s performance during the game?

“as soon as I started using gpexe, I immediately realized that both the practicality and the speed of use were much better than in other tools”

The loads for each session is quite standardized and very regular during the week; therefore, when a player goes outside this standard, the alarm bell rings and consequently we decide how to handle every specific case.

5) Do you use live and for which purpose? 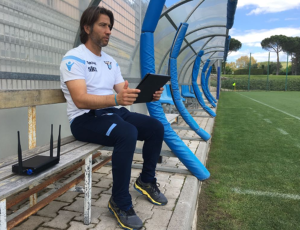 No, we do not use it for now. Considering the way we work at the moment, we would not be able to exploit its full potential. The main utility would be to modify the exercise during the training, i.e. changing times, spaces, number of players and rules, being able to verify in real-time how to intervene based on the pre-set goal.

It could be used to stimulate the work of players that are not reaching the expected values, but I think this kind of work is already part of the coach’s competences, according to his perception that could be supported by real-time data.

As I said, the match is our reference model, because it is usually the maximum expression of energy expenditure. Here, as an example, is one of the reports from a Serie A official match, from which we get data to build our model.

As mentioned above, I deliver the report to the coach on a daily basis, with the 8 parameters, and together we discuss the training as well as the individual performance.

For example, if an athlete works with the team after an injury and he shows a negative trend, we evaluate together what to integrate, on the basis of his data prior to the injury. 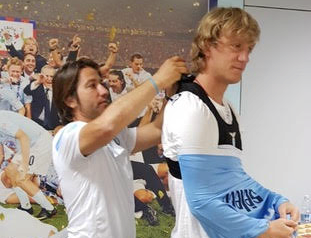 In the gym, I always have the daily report on my desk, which is the same report I share with the coach, except for some specific notes. The players can come and take a look at the training data, which they’ve learned to interpret over time; specifically, they know which are the more important metrics to check based on the drill and their position.

For example: if a centre back does not have a huge volume in terms of distance, this is less important than a very low equivalent distance index which is one of the main focal points for this specific role.

Very little time: the operational phase is negligible; the total time, including vests management, data download and the report preparation lasts from half an hour to an hour, depending on the complexity of the session.

The choice is closely linked to my previous experience in the club with my colleagues Francesco Perondi and Matteo Osti: we decided to start this monitoring and analysis project with the gpexe system. As for my experience with other systems, it is rather limited, as I have had the opportunity to use them only for a limited period as a trial.

Despite this, as soon as I started using gpexe, I immediately realized that both the practicality and the speed of use were much better than with other instruments I had tried.