High metabolic load distance (HMLD): it’s not what it should be when dealing with the energy balance.

The energetic variables based on the metabolic power model have become widespread parameters to assess team sport demands. In addition to the basic metrics suggested by the authors, many other proposals have found common practical application either because they were developed by some “celebrity practitioner” or because they are available in the widely used tracking systems.

One of the most common parameters when dealing with metabolic variables is the high metabolic load distance (HMLD) which is defined as the distance, in meters, covered by a player when the metabolic power exceeds 25.5 W⋅kg⁻¹. This parameter is assumed to yield a “better measure to represent the total high-intensity activity” since it includes both high speed running (> 5.5 m⋅s⁻¹) or high acceleration activities.
However, when the goal is to have a metabolic view of the performance, the distance covered (even above a defined metabolic power threshold) can be misleading. The limits can be clarified by the following points.

What does a 25.5 W⋅kg⁻¹ power threshold mean from a physiological point of view?

The energy expenditure during the game, the onset of fatigue and the adequacy of the training to improve endurance fitness are some of the reasons why it’s interesting to study the ‘metabolic demands’ in team sports in depth. In this regard, the boundary between aerobic and anaerobic sources, as well as the fraction thereof, can be appropriately described using the individual maximal oxygen consumption (VO₂max) because, during the very strenuous exercise of short duration, the metabolic power requirement can attain values greatly surpassing the subject’s VO₂max.

In elite soccer players, the average VO₂max can be considered to be 55-65 ml O₂⋅kg⁻¹⋅min⁻¹, corresponding to a metabolic power between 14.8 and 21.4 W⋅kg⁻¹ (above the resting O₂ consumption). To this aim, a metabolic power threshold closer to the individual VO₂max seems to be preferable than the arbitrary 25.5 W⋅kg⁻¹ threshold, corresponding to about 77 ml O₂⋅kg⁻¹⋅min⁻¹ above resting. This is the reason why, when the players’ VO₂max is not known, it is convenient to set this threshold to 18 W⋅kg⁻¹ (gross VO₂max ≈ 56 ml O₂⋅kg⁻¹⋅min⁻¹).

Why are we interested in assessing the activity above a metabolic power threshold in team sports?

Speed and acceleration are usually considered separately to measure the performance of a player in team sports. The most common reports frequently refer to the number, the time and the distance for a specific speed or acceleration category (e.g. 53 seconds and 250 meters between 16 and 19 km⋅h⁻¹, or 15 accelerations above 2.5 m⋅s⁻¹).

However, the use of metabolic power, which is “…the instantaneous rate of ATP utilization (i.e. the product of speed and energy cost)…”, allows one to include, in a single parameter, both the effects of velocity and acceleration on the energy consumption. Once this metric is available, is it convenient to use the distance to assess the effort above a given metabolic power threshold? Let’s make some simple examples on four exercises performed at the same average speed!

It’s quite clear that, even if the average speed remains the same, the more the athlete accelerates, the more the exercise becomes demanding (average metabolic power and average energy cost increase, see the last two lines in Table 1).
Something similar should happen when the focus of the analysis is limited to high metabolic power only. With the limits of the selected threshold discussed above, the intensity-ranking of the exercises above should be the same. However, information on the so-called “high intensity” is very different, depending on the parameter considered (see Table 2): 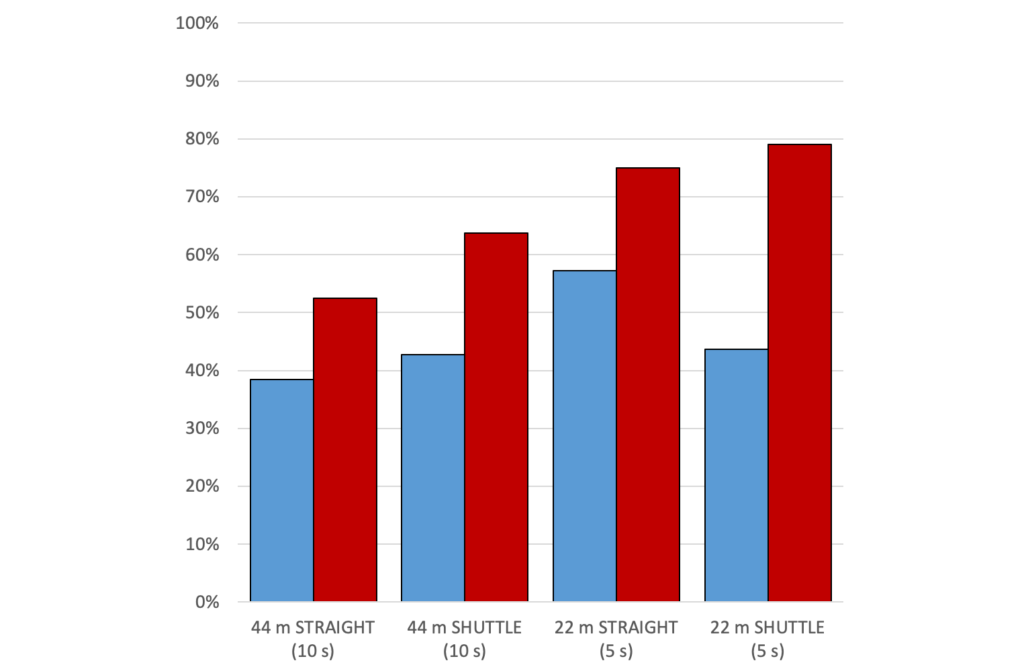 It should be noted that it would be necessary to better define the meaning of “high demanding phases”. The energy spent when the metabolic power is greater than 25.5 W⋅kg⁻¹ should definitely be considered “demanding”, given its substantial anaerobic source. However, the same can be said for every instant in which the energy demand (i.e. the metabolic power) is greater than the energy supply from aerobic sources (i.e. the oxygen consumption or VO₂), since this, in any case, represents an oxygen debt to be paid.

As an example, when I start walking from a sitting position, even if the necessary metabolic power requirement is far below my individual VO₂max (which is however dramatically low!), a certain amount of energy will arise from anaerobic sources until the steady-state is reached. This is the reason why, when we deal with the metabolic assessment of the performance, it is better to refer to the ‘anaerobic energy’ (i.e. the anaerobic contribution to the overall energy expenditure) rather than the energy expenditure when the metabolic power is above a defined threshold (see Figure 2 from C. Osgnach and P.E. di Prampero. Metabolic Power in Team Sports – Part 2: Aerobic and Anaerobic Energy Yields. Int J Sports Med, 2018).

The metabolic power approach has been proposed in team sports in order to define and assess high-intensity efforts in a better way than time spent and distance covered at a given speed and/or acceleration categories allow one to do.
When dealing with metabolic power, HMLD represents a step back in relation to the opportunities given by the model since it has rather obvious limits. These limits occur especially when repeated high-intensity bouts take place on limited spaces, e.g. during Small-Side-Games, where high energy consumption is required in spite of the reduced HMLD.
It can be concluded that the estimation of instantaneous metabolic power and oxygen consumption becomes increasingly interesting parameters to evaluate the energy balance during the exercise, the training session and even the match.

Beyond the physiological meaning of the ‘anaerobic energy’ discussed above and in spite of the limits inherent in choosing an arbitrary threshold, the energy expenditure rather than the distance covered above 25.5 W⋅kg⁻¹ seems to be more appropriate in the assessment of high-intensity. It would be preferable to use High Metabolic Load Energy (HMLE) instead of HMLD if we have to make the most of the energetic approach applied in team sports; an effective option, if dealing with distance is mandatory, should be to use High Metabolic Load Equivalent Distance (HMLED), that is, the distance that the athlete would have covered at a constant speed by using the energy consumed when the metabolic power is greater than the selected threshold.

END_OF_DOCUMENT_TOKEN_TO_BE_REPLACED

END_OF_DOCUMENT_TOKEN_TO_BE_REPLACED
We use cookies to ensure that we give you the best experience on our website. If you continue to use this site we will assume that you are happy with it.OkPrivacy policy