We have recently followed, either personally, or via the press and the available media, several meetings and seminars dealing with the physiology and biomechanics of team sports, soccer in particular. We have been rather surprised to notice that often (too often, indeed) the speed of the player on the terrain is considered as a reliable measure of the corresponding exercise intensity, be it during a training drill or a match. However, as pointed out on several occasions, the running speed is a correct index of the corresponding exercise intensity only when the speed itself is constant in time. The few paragraphs that follow are dedicated to illustrating this state of affairs on the basis of a paradigmatic example: the 100 m dash.

In this case, in fact, the speed increases rapidly in the first instants, attains a maximum after about 5 – 6 seconds (Fig. 1) to decrease slightly in the last part of the run. It follows that the forward acceleration (i.e. the change of speed per unit of time) is very high in the first phase of the run and decreases progressively to become negligible during its central phase (Fig. 2) and even slightly negative in its final part. 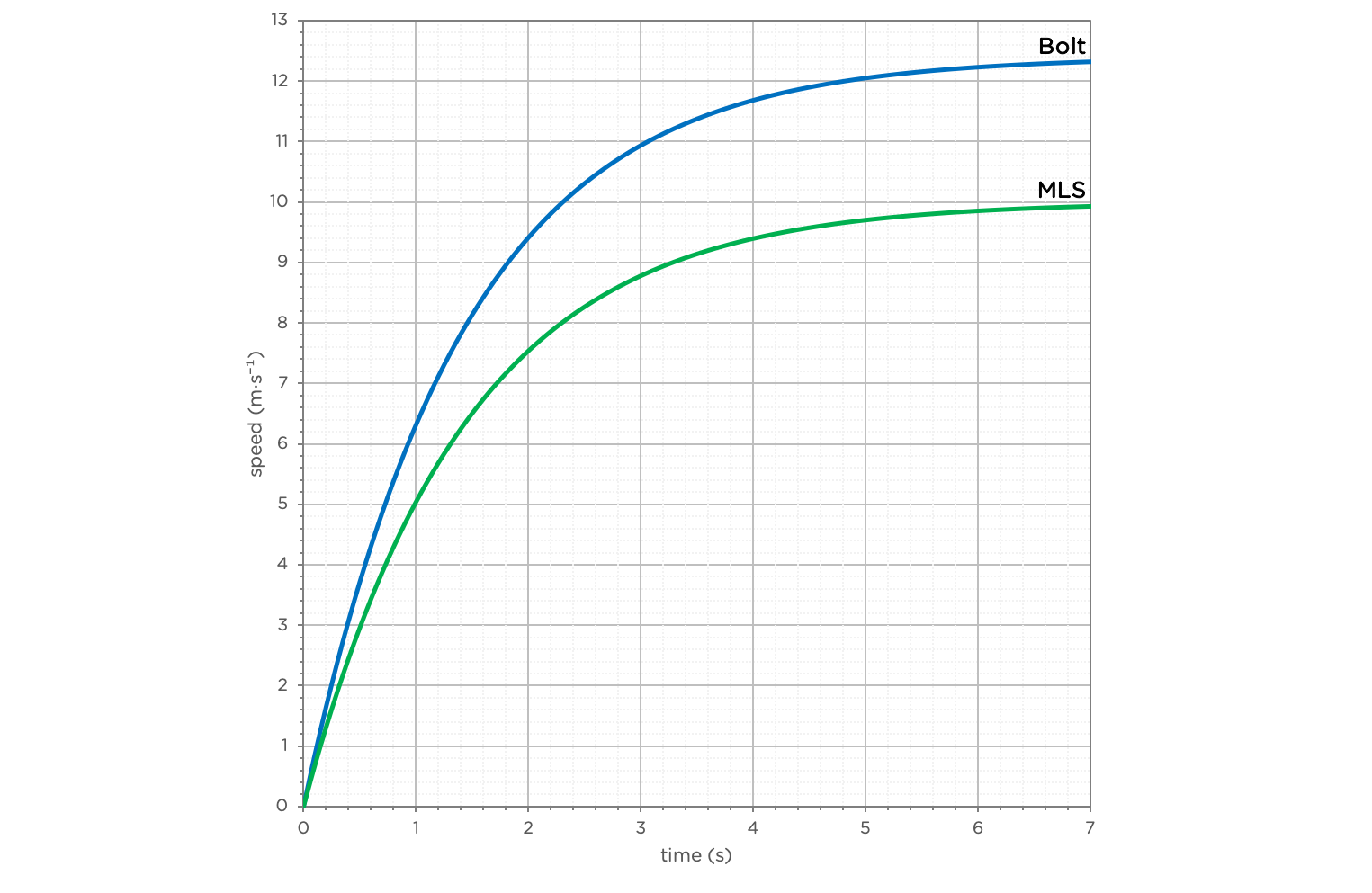 As a consequence, the energy cost of running (i.e. the energy spent by the subject per unit distance and body mass) is very high at the onset of the run and decreases substantially thereafter, to become equal to that applying at constant speed in the last phase of the run. This is so because, during the acceleration phase, covering one-metre distance is much more energetically demanding than covering the same distance at constant speed. More specifically, we have previously shown that accelerated running on flat terrain is energetically equivalent to running uphill at constant speed, wherein the “equivalent” slope is dictated by the forward acceleration. Omitting any further details, that the interested reader can find in the appropriate literature (P.E. di Prampero et al., 2005; 2015; 2018; C. Osgnach et al., 2010; 2018), since the energy cost of uphill running is fairly well known for a long time (R. Margaria, 1938), this allows one to estimate the energy cost of accelerated running, and the corresponding metabolic power (Pmet), as given by the product of the energy cost (Cr) and the speed (v). 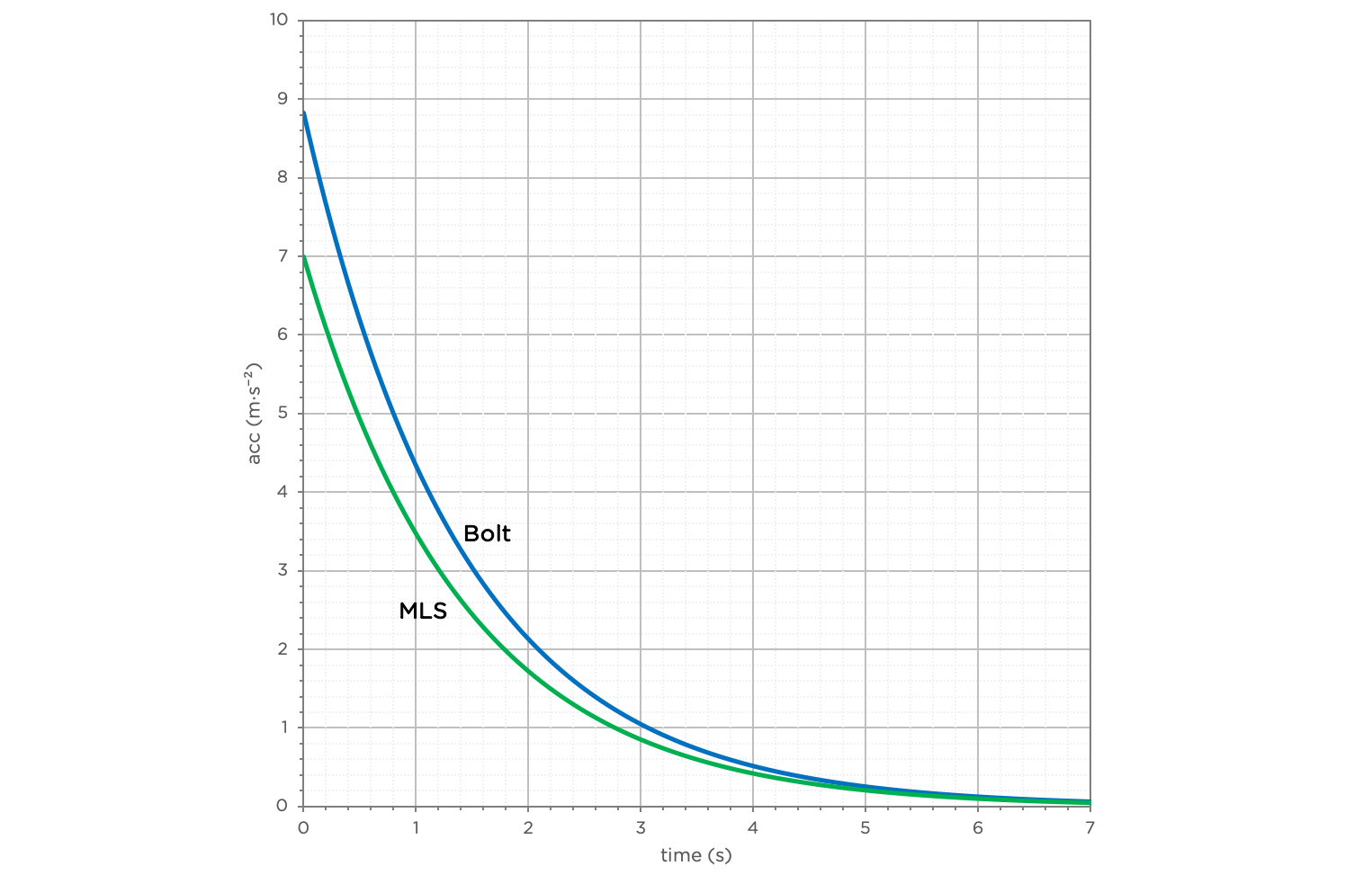 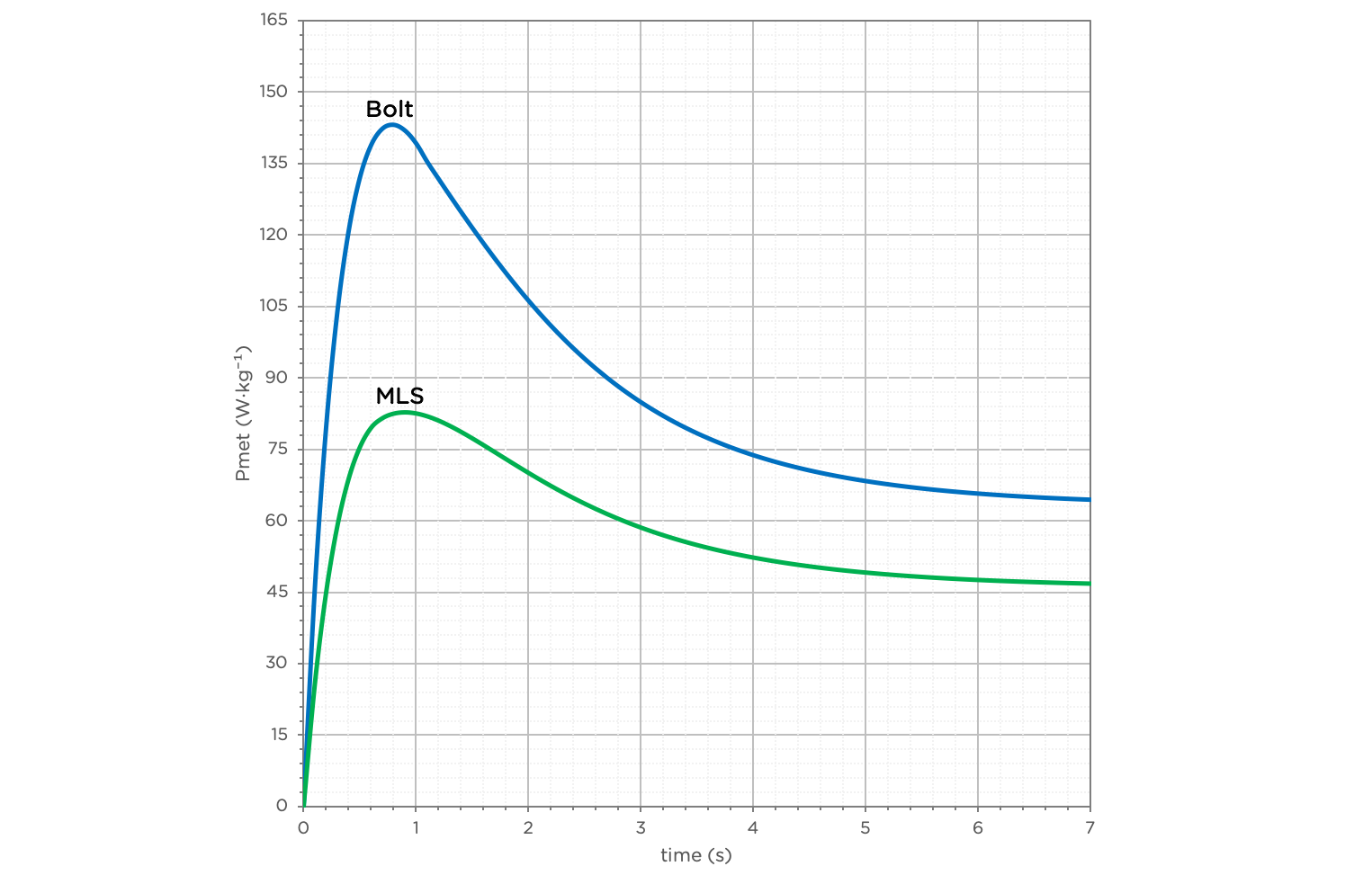 It seems important to stress here that the instantaneous metabolic power is a measure of the energy requirement, per unit of time, necessary to carry out the exercise in question. As such it can also be expressed in equivalent oxygen consumption, i.e. as the amount of oxygen necessary to cover the corresponding energy requirement under completely aerobic conditions. In the specific case of a 100 metres dash, the metabolic power requirement greatly exceeds the maximal aerobic capacity; hence, the necessary energy yield is entirely obtained (or very nearly so) from anaerobic alactic sources, the only ones that can cope, in terms of intensity and of response time, with the corresponding energy demand. Indeed, the peak metabolic power values of about 140 and 80 W/kg reported in Figure 3 for Bolt and for the medium level sprinter correspond to O2 consumption rates of 400 and 225 ml O2/(kg min), respectively, much larger than any possible value of maximal O2 consumption in humans.

An analysis of figures 1 and 3 shows clearly that, in the case of Usain Bolt:

In the case of the medium level sprinter, the general patterns of speed and power, neglecting the corresponding absolute values, follow an essentially equal trend.

It necessarily follows that, in exercises characterised by frequent accelerated running phases the speed cannot be considered an appropriate index of the corresponding intensity, provided that this last is defined as the energy requirement per unit of time. QED: Quod Erat Demonstrandum

END_OF_DOCUMENT_TOKEN_TO_BE_REPLACED

END_OF_DOCUMENT_TOKEN_TO_BE_REPLACED
We use cookies to ensure that we give you the best experience on our website. If you continue to use this site we will assume that you are happy with it.OkPrivacy policy