The concluding paragraph of our previous article (https://gpexe.com/f-v-profile-game) was devoted to highlighting the fact that the assessment of the sprint ability of a given athlete via his force-velocity (F-V) relationship yields useful information on the quality of the acceleration itself. Indeed, several studies have shown that, over a 4 seconds sprint (a rather common event in team sports such as soccer, basketball, rugby, etc…), for any given overall force applied to the terrain, the closer to the horizontal the forward thrust, the better the performance (1).

It follows that, for the fitness coach, it would be highly valuable to assess the ability of the athlete to direct his push as much as possible in the horizontal direction during a sprint, since this capacity is not necessarily linked to the absolute force generation. In addition, it would also be highly desirable to assess whether, after a training period dedicated to increasing the force production, the so obtained increase leads to a better accelerating capacity and, if so, which part of the F-V relationship has changed. Indeed, even if the sprint time over a given distance is an essential tool for evaluating the athletic calibre of a given subject, it is not sufficient to highlight the characteristics of his forward acceleration capacity with increasing velocity.

To this aim, we assessed the forward acceleration of two athletes characterised by essentially equal performance times over a 30 m sprint. For both subjects we created an F-V profile, as described in the preceding article (https://gpexe.com/power-force-velocity-properties-sprint-running/), with the aim of showing how this approach can be used to highlight differences among subjects with essentially equal athletic capacities, thus obtaining useful information allowing the coach to select appropriate individual training strategies. 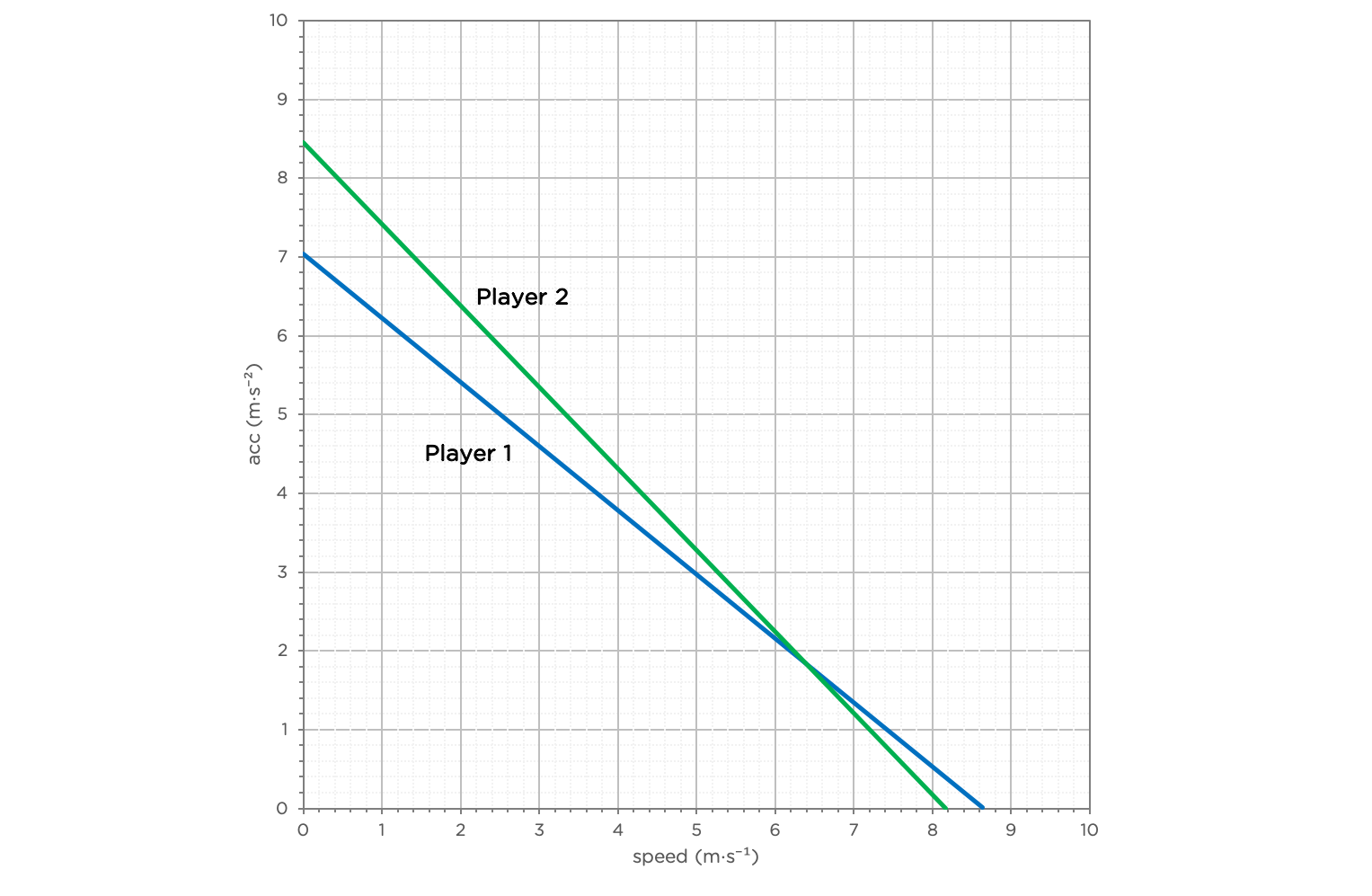 Figure 1 shows the F-V relationship of the two sprinters over a 30 meters dash, wherein the ordinate reports the forward acceleration, i.e the horizontal force per kg body mass (N/kg). As mentioned above, the performances of these two athletes over this distance were essentially equal: 4.68 s for Player 1; 4.64 s for Player 2. In spite of these essentially equal performances, their F-V profiles are rather different. Indeed, in the first part of the sprint, at low velocity, Player 1 develops acceleration values, and hence horizontal forces, definitely lower than Player 2. However, things change markedly at high speed. This state of affairs can be attributed to the different mechanical abilities of the two subjects: a greater capacity of Player 1 to produce high horizontal forces at low speeds that, however, is not maintained when the speed increases.

It seems a platitude to highlight the fact that this type of analysis allows the coach to select appropriate individual training strategies. Indeed, as mentioned above, these two athletes, in spite of essentially equal sprint performances, are characterised by substantially different force production capacities; as such, it seems likely that, to improve their sprint abilities, they would need substantially different training strategies, as follows. Player 2 ought to increase his horizontal force at low speed by means of appropriate drills (running on steep slopes or very heavy sled sprinting). On the contrary, Player 1 ought to increase the horizontal force generation at high speed, i.e. when the contact time of the foot with the terrain is reduced (accelerations from cruising speeds).

It can be concluded that the most important aspect of the approach discussed above (1, 2) consists in the fact that the force application technique, more specifically the capacity of orienting the overall force in the horizontal direction during the acceleration phase, is a basic determinant of the performance, not only in 100 m dash, but also in shorter sprints (on the order of 4 s), rather common events in team sports such as soccer, basketball and rugby.
In addition, based on the brief analysis on the two players summarised above, we would like to stress that knowledge of the F-V profile yields useful information for improving the sprint characteristics of these athletes. Indeed, on these bases, the informed coach can: