What do we really analyse?

In part 1, we dealt with the separate use of speed and acceleration to detect the most intense phases of the match and/or training. For both parameters, we highlighted the main limits of considering them separately. In the following paragraphs we will describe the so-called ‘high intensity’ using different criteria, realizing how easy it is to grab the wrong end of the stick.

For simplicity, we refer to the representation above where acceleration/deceleration is given on the X-axis and speed on the Y-axis (figure 1). In this graph it’s very convenient to draw the thresholds discussed in part 1 (figure 2), but the conclusions would be the same even when using different thresholds:

“Want to assess the high intensity? It’s easy to grab the wrong end of the stick!”

Once this graph is defined, it is very useful to assess the match performance using this representation. Playing time, distance covered and energy expenditure from an official match and from four different players are reported in table 1 (overall activity), table 2 (high-speed activity) and table 3 (high-acceleration activity):

The combined analysis of high-speed and high-acceleration (table 4), frequently used to assess the high intensity, would lead to the following result (data expressed as a percentage of the total match activity previously reported in table 1):

Can we reasonably assume this activity alone to be the high intensity made by a player during a match? It is hard to say… and even harder to believe!

high speed + high acceleration: is there anything else?

The graph from figure 2 is really useful for understanding the benefits of the energetic approach to analyse the performance in team sports. On the same graph (see figure 3), it is possible to draw an iso-power curve representing all the combinations of speed and acceleration₂ corresponding to the maximal oxygen uptake of these athletes (VO₂max, red curve). Indeed, the same energy demand (i.e. metabolic power) can arise from:

By doing so, a high-metabolic-power zone is “magically” highlighted in red: it includes, on one hand, the majority of both the high-speed and high-acceleration zones (light red area) and, on the other, also an additional zone below the high-speed and high-acceleration thresholds (HP, dark red area) where metabolic power is still greater than VO₂max. 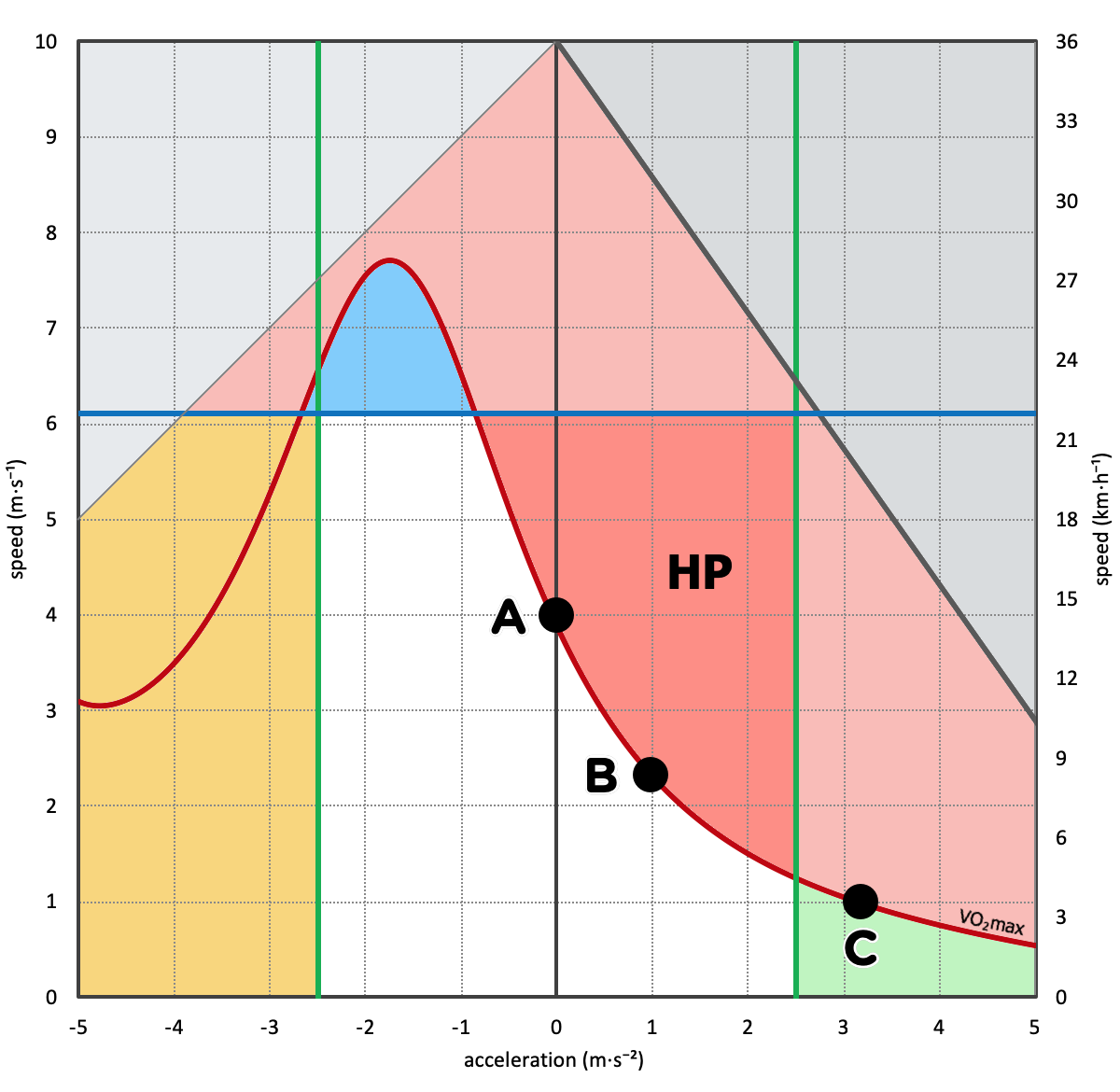 This red area is very interesting from a physiological point of view because it incorporates all the activities that need energy from anaerobic sources. It goes without saying that every action carried out in this zone will determine an oxygen debt contraction that, sooner or later, will require a decreasing energy demand phase necessary for the debt payment (1). The balanced sequence between oxygen debt contraction and oxygen debt payment is the only strategy to maintain the average metabolic power as high as possible during the match; it goes without saying that the average metabolic power during the match will necessarily be lower than the VO₂max in the 90-minutes. In contrast to the speed and acceleration thresholds, the choice of VO₂max as the metabolic power threshold is very convincing because we know the difference between aerobic and anaerobic sources in exercise physiology very well!

How much anaerobic activity are we talking about?

I deliberately haven’t used the words ‘intensity’ and ‘activity’ in the last sentences since it is preferable to think in terms of ‘average power’ and ‘energy’ when it comes to the metabolic approach.

Table 5 shows the ‘activity’ (oops, I did it!) carried out in the dark red zone (HP) by the four athletes:

Also in this case, it is convenient to represent the activity above VO₂max (including HS and HA where appropriate, i.e. dark + light red area) as a percentage of the total match, to understand the energy distribution between aerobic and anaerobic sources or, in other words, the balance between oxygen debts and payments. The following table 6 shows the results:

This paint-by-numbers picture about the so-called ‘high intensity’ seems to be more convincing than the previous vision based on speed and acceleration separately. Indeed, when considering the player’s performance during the match as an entirely aerobic exercise, the balance between energy demands above and below VO₂max should be in the order of magnitude of fifty-fifty.

This representation would become even more interesting (and useful in practice!) by describing all the power events and recovery phases… but that’s a different story already discussed in a previous article and also in the second part of the last review we published last year (reference).

However, it is very curious how occurrences in the comparison of four players considered above (see table 7) can be misleading:

There’s no reason to argue extensively about it: it follows clearly from what has been reported that the information of high speed phases, as well as the count of accelerations (even if considered jointly), cannot be regarded as a surrogate of the energetic analysis based on metabolic power approach.

In order to improve the understanding of the performance, this state of affairs should be very consciously borne in mind, especially given that the most needed information from the metabolic approach arises from the balance between high demanding phases (i.e. power events) and recovery phases (one of the most interesting areas in the analysis of the performance, in my opinion).

(1) It should be stated that an oxygen debt contraction phase could also occur when metabolic power (energy demands) is below VO₂max whenever the corresponding instantaneous VO₂ is less than maximal oxygen consumption.