In the first part of this article, we discussed the limits of acceleration events to describe the high-intensity phases in team sports and which gpexe metric can be used instead.

The exercise analyzed takes place over the entire length of the pitch and consists in a sequence of three accelerations/decelerations from the beginning to the end of the pitch; each “fast and loose” sequence is followed by a 30-s recovery phase and repeated for a total of six times (see image). 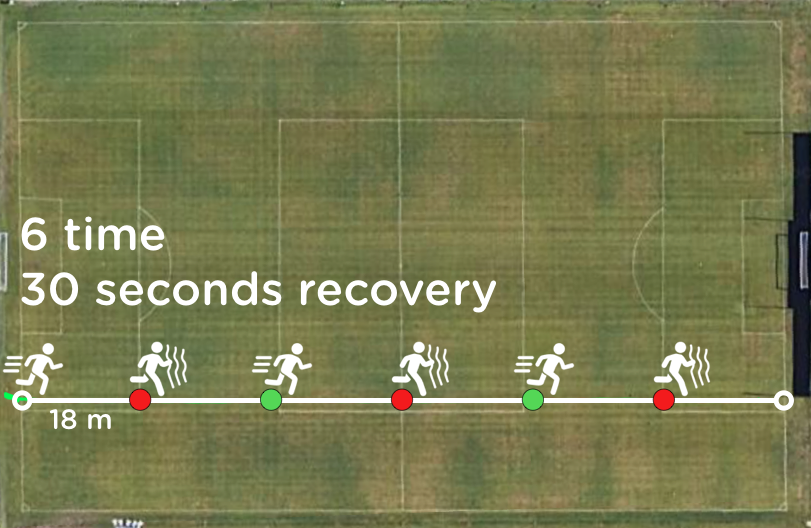 Another topic that can be discussed is the opportunity to measure heart rate for additional information and a more in-depth analysis. On this topic, the same exercise provides us with an excellent example to highlight the limits of heart rate in team sports.

Heart rate is used as a measure to estimate oxygen consumption, which is the average aerobic intensity of the proposed exercises. In the above example, the mean heart rate sustained by the athlete in this exercise was 80% of the reserve heart rate and was kept more or less constant throughout the duration of the exercise (both during the recovery phases and between each bout).

So, did he carry out an exercise at 80% of the maximum aerobic power?

If the exercise had been a continuous run at a constant speed, the answer would be YES. In fact, in this condition, the pulsating stroke and the arterio-venous difference (the other two factors that determine the maximum oxygen consumption) would have remained almost constant and any variation in heart rate would have reflected a proportional variation in oxygen consumption.

This consideration is evident from the previous figure, in which the heart rate is represented by the orange trace (almost constant from the beginning to the end of the exercise) and the estimated oxygen consumption is represented by the blue trace (rises during the work phases and falls during the phases of recovery). The average oxygen consumption in this exercise was 66% of the VO₂max. It is evident that if we had used the mean heart rate (80%) to infer about the aerobic intensity of the exercise (66%), we would have judged the exercise as much more intense, when in fact it was not!

Using metabolic power and oxygen consumption in these situations removes us from the limitations of using heart rate. Furthermore, it allows one to understand the characteristics of the single actions that have determined a certain consumption of oxygen (the so-called power events). Heart rate alone (which in the above exercise was almost constant) does not allow one to do the same. In fact, the same behaviour of the heart rate could also have been induced by a continuous run… without allowing one to notice any difference between a continuous and an intermittent exercise, two deeply different proposals in terms of training stimulus and induced adaptations!