The ideal training stimulus maximises performance and simultaneously reduces the negative consequences of the training, i.e. the onset of fatigue and the risk of injury. The ratio between the workload carried out during the last week (“acute workload”) and the average of the workloads sustained in the previous four weeks (“chronic workload”) is called Acute:Chronic Workload Ratio (ACWR) and leads you to more accurate workload planning.

Appropriate workload planning represents one of the most important aspects to improve physical performance and minimise the risk of injury [1]. The ideal training stimulus is indeed what maximises the performance and simultaneously limits the negative consequences of the training itself, that is to say, the occurrence of fatigue and the likelihood of injury [2, 3]. As a matter of fact, injuries are one of the main issues that fitness coaches, coaches and medical staff have to face during the sports season. Injuries lead to limited availability of players, resulting in lower chances of success for the team, an increase of relapses as well as extra costs for sports clubs [4, 5]. The complex and multi-factor nature of the injury includes both constant risk factors like age, sex and previous injuries and variable ones like strength levels, fitness aerobics and flexibility [6, 7]. The possibility to manage the variable risk factors through the training programs offers coaches and fitness coaches the opportunity to minimise the likelihood of injury. Workloads represent one of these variable factors and their monitoring and study by sports scientists has considerably increased in the last years [7-10]. Numerous studies carried out in different sports (soccer, rugby, basketball, handball, Australian and Gaelic football), have shown a relationship between workloads and injury [11-13]. One of the models that first described this relationship, meeting a growing interest (and some criticism too) in the last years, is the Acute:Chronic Workload Ratio (ACWR) [11].

The  Acute:Chronic Workload Ratio (ACWR) represents the ratio between the workload carried out both during trainings and matches in the last week (“acute workload”) and the average of workloads performed the previous four weeks (“chronic workload”)* (fig. 1) [11]. 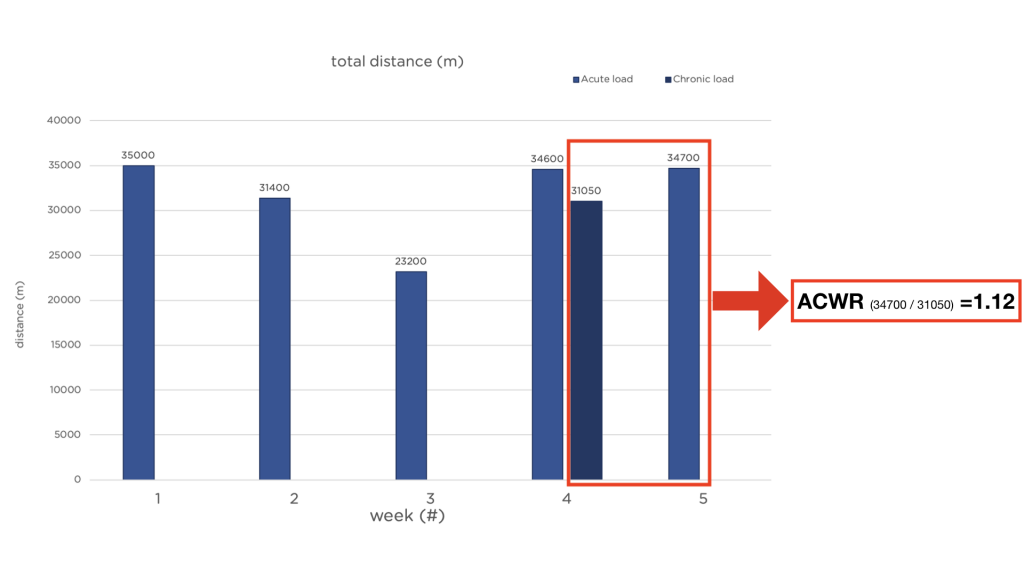 Fig. 1 The black bars represent the total distance covered by the athlete during the week (“acute workload”). The grey bar represents the average of the first four weeks of training (“chronic workload”). The ratio between the distance covered in the last training week (5th week, “acute workload” = 34700 m) and the average of the previous four weeks (“chronic workload” = 31050 m) equals the Acute:Chronic Workload Ratio (ACWR = 1.12).

*Editor’s note: in its “first version”, when calculating the ACWR, the “chronic workload” included also the “acute workload” as follows:

“Is there an optimal range called “sweet spot” within which the likelihood of injury is low, whereas outside it the injury risk considerably increases?“

There is an optimal range called “sweet spot” within which the likelihood of injury is low, whereas outside it the injury risk considerably increases (fig. 2) [8, 11]. According to the ACWR, three areas have been identified: 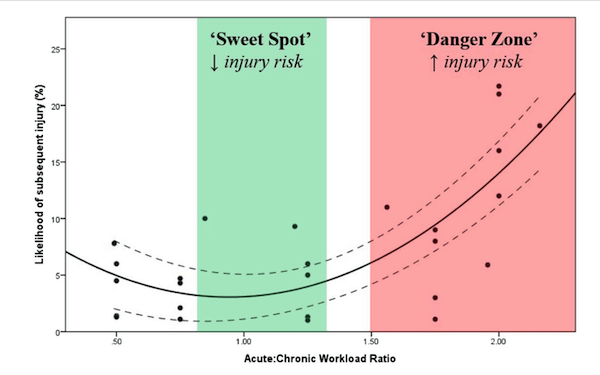 ACWR allows to verify if the stimuli to which the athlete has been exposed both during training and match in the last week (“acute workload”) are coherent compared to the stimuli to which the athlete was physically prepared for, that is to say, compared to the workload carried out in the previous four weeks (“chronic workload”).

An example will clarify the value of this ratio (fig. 3). In team sports, one of the main issues for coaches and fitness coaches is to make sure every athlete carried out homogeneous and adequate workloads. Too often, athletes who usually do not play or only partially play in the weekly match show lower loads and intensities compared to their teammates who normally play in. As shown in fig. 3, players like Athlete 2 who are not involved in the weekly match for medium-long period (week 1-4), as soon as they play in one (week 5), they can undergo far superior stimuli than those usually undergone during the last weeks of training, exposing them to higher injury risk (ACWR = 1.5 – week 5) [11]. This particular, but not unusual scenario highlights how the knowledge of what is required during the match, optimal planning of workloads and their monitoring are crucial. They allow training the athletes for the stimuli they will undergo, limit excessive variations in workloads (remaining within the “sweet spot”) and reduce the likelihood of injury. 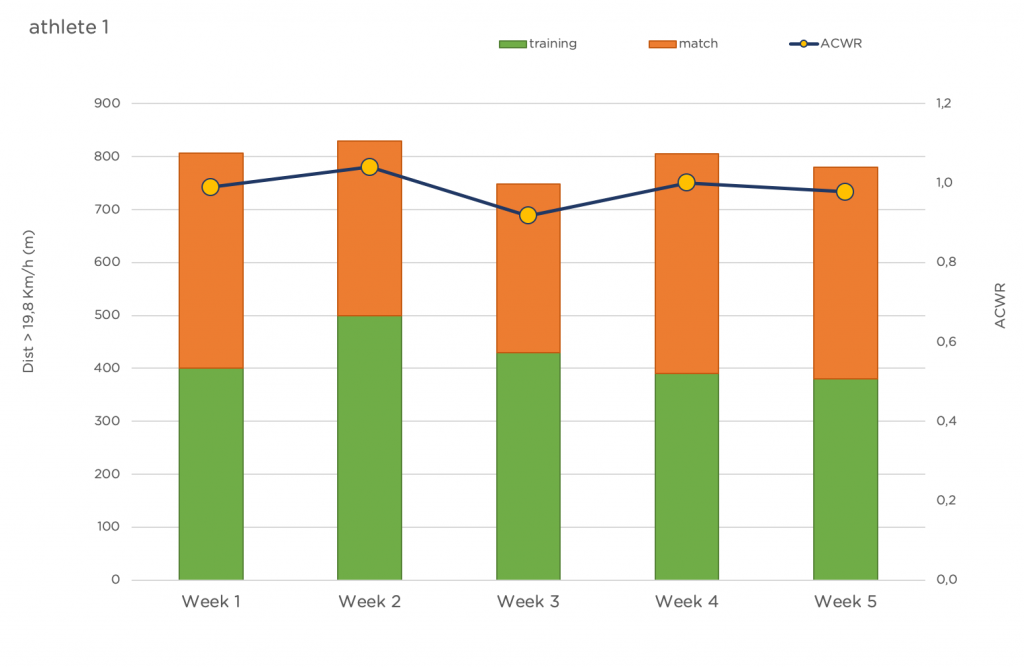 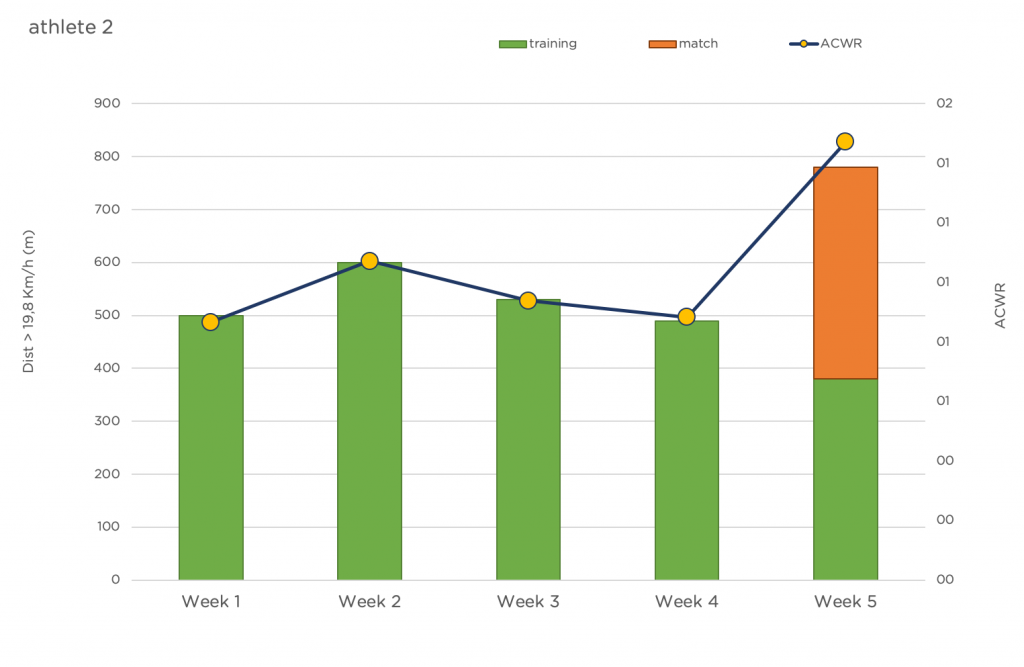 Fig. 3 Each bar shows the distance covered during the week at high speed (≥ 19,8 Km/h) by two professional rugby players, playing the same role, in training (white bars) and during championship matches (grey bars). The black squares show the trend of ACWR during each week. It is possible to notice that during the 5 weeks taken into account, while the ACWR of Athlete 1 remains inside the “sweet spot” (ACWR between 0,9 and 1,1 where the probability of injury is low), the ACWR of Athlete 2 shows a spike (ACWR = 1,5 “danger zone”) in week 5, the only week he played the match). In addition, it is interesting to notice how, to reduce the gap of distance covered at high speed between the two athletes, in weeks 1-4 Athlete 2 underwent supplementary workload. The distance covered on average during training by Athlete 2 (530 m) is about 20% more compared to the distance covered by Athlete 1 (430 m). However, this supplementary training is totally inadequate when compared to the effort required in week 5 when Athlete 2 covered about 50% more (780 m) than the average distance covered during the previous four weeks (530 m).

The ACWR model is based on two principles:

Several studies showed how great variations during weekly workloads are linked to an increased likelihood of injury [11, 21]. When workloads are rather stable over time (from 5% to 10% more compared to the previous week) the injury risk is fairly low (<10%). On the other hand, when the workload increments are 15% more compared to the previous week, the likelihood of injury considerably increases (from 21% to 49%). Therefore, to minimise the injury risk, weekly workload increments should be lower than 10% (fig. 4). 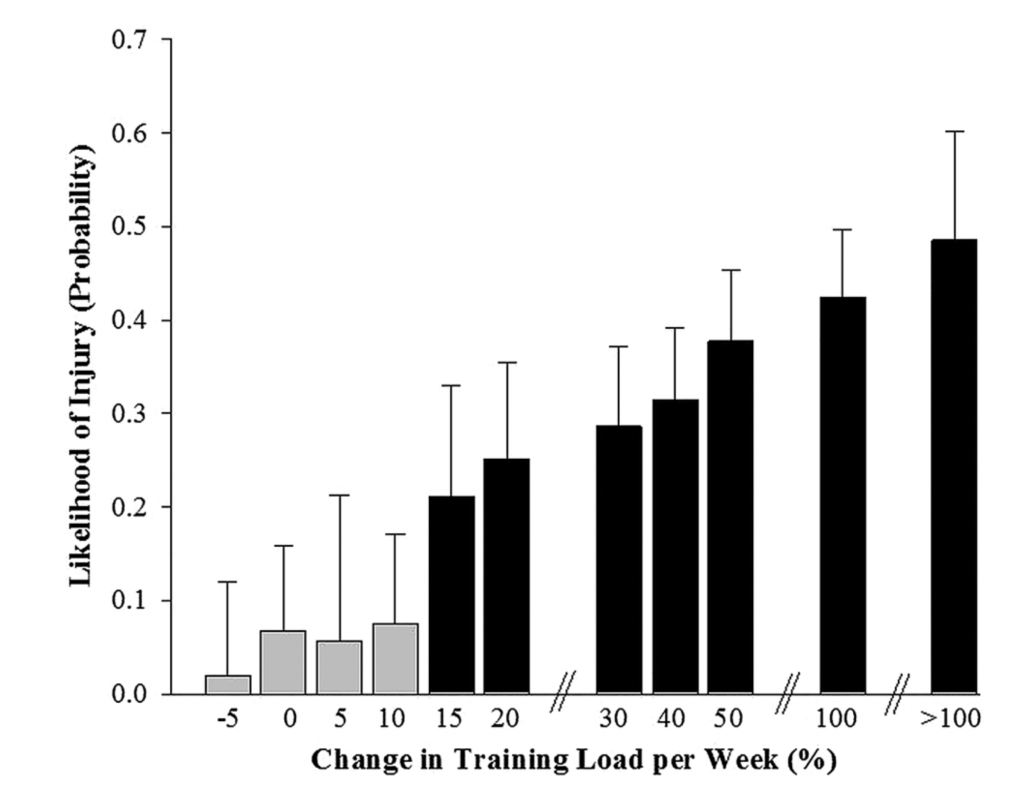 The second principle on which the ACWR model is based on the fact that a high chronic workload has a “protective” effect reducing the likelihood of injury. A “strong” athlete (i.e. with a high chronic workload), compared to one with a low chronic workload, is less exposed to an injury risk because over time he developed a good physical fitness and is able to bear high workloads and endure potentially stressful stimuli, like a sudden spike [20]. It is crucial, then, to propose the athletes a gradual progression of workloads in order to prepare them to the so-called “worst-case scenario” and therefore limiting the injury risk linked to this particular situations. As shown in fig. 3, athletes who do not regularly play in the weekly match are often the most exposed to stimuli they were not physically prepared for. Training schedules must take into account the specific requirements of the match to allow the athlete to respond to these maximal stimuli.

Which are the strategies to adopt if the chronic workload is not adequate and in case of a spike? The lack of scientific literature in this regard forces us to rely on experience and common-sense. The spike is a stimulus to which the athlete was not exposed to before or just partially. This particular risky situation normally occurs in official matches during which is difficult to predict to which stimuli the athlete will be exposed.

The monitoring and a good workload planning allow to avoid, or at least limit, quite easily the occurrence of spikes during training. From another perspective, the spike can represent the target that the athlete will have to gradually achieve (and maintain) over time in order to be prepared to more stressful physical requirements (worst case scenario). The task of the fitness coach is to create a progression of workloads which meets the specific requirements of the match and protects the athlete from possible injury risks (fig. 5). 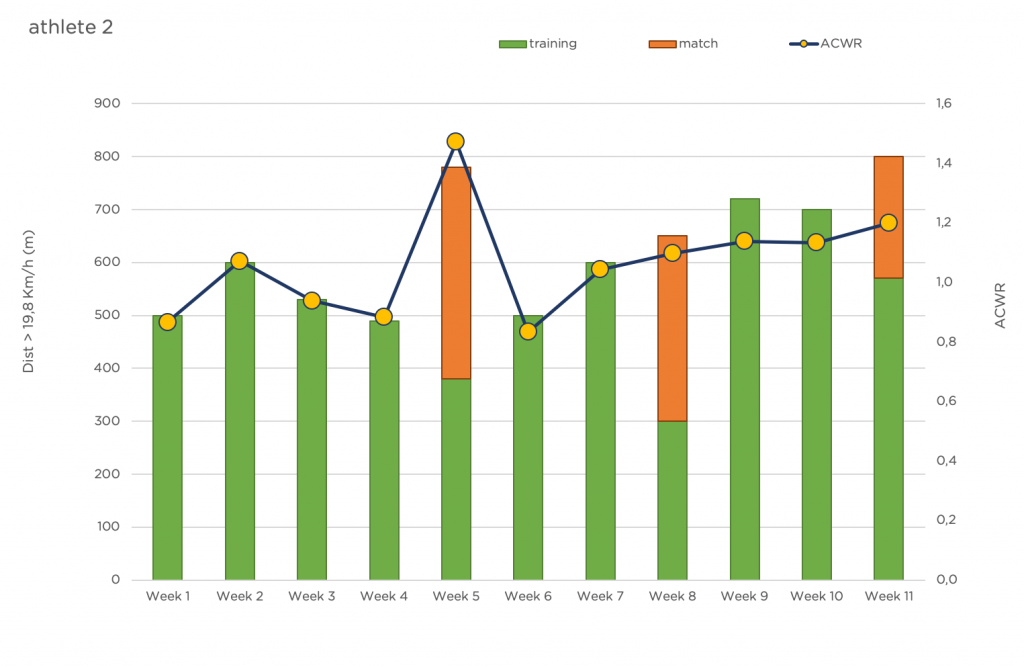 Fig. 5 The chart recalls the example of fig. 3 and shows how a 5-week progression (from week 6 to 10) allows reaching an adequate volume to what could be the worst-case scenario for Athlete 2 (about 800 m covered at high speed during the week) without many variations in weekly workloads (ACWR between 0,8 and 1,1).

The second part of the article will be published soon and will deal with the ACWR calculation models, the choice of workload variables and time window, the criticisms and the limits of the ACWR approach.

Gpexe users can check the tutorial section into the web app for more details about how to use the ACWR.