The limits of acceleration

I have covered less distance but the number of my accelerations is greater!” – this could be the comment from the majority of players while looking at the performance report after a training session or a match… and often the same would be the view of the coach!

What’s right or wrong about that? The whole story is quite complex but the answer is pretty basic: “What are you really interested in?”.

Both the parameters mentioned above have their intrinsic limitations but they are so simple and intuitive that they don’t require further explanation. This is probably the reason why they’re widely used despite the (un)known weaknesses. Distance is a good measure of the total workload (or total volume) even if we don’t know «how» this distance was covered. I always use this example to get this completely clear (figure 1): if you drive your car on a highway for 100 km at an average speed of 100 km⋅h⁻¹, you will reach your destination after 1 hour and you will have 3 liters less gasoline in the tank; but if you drive downtown the same distance, the average speed will hardly exceed 50 km⋅h⁻¹, you’ll arrive after 2 hours (so you’re slower!) but you will need nearly 30% more fuel than before! If this is the case, which is the most compelling parameter to represent the amount of activity carried out by the car? The distance traveled (the same in both cases), the average speed (half for city driving compared to the extra-urban cycle), or the fuel consumption? 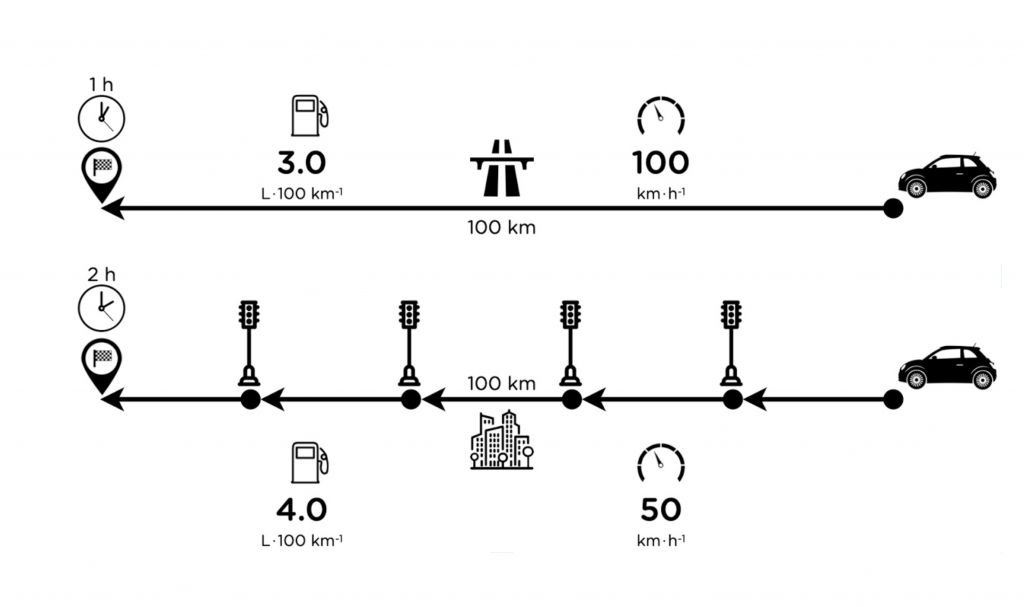 The greatest amount of gasoline consumed for city driving is because a large amount of fuel is needed to repeatedly accelerate the car (or increase its kinetic energy) every time it has to start again from a traffic light.

The situation is pretty much the same if we replace the car with an athlete. And the perfect athlete to represent the ‘city center context’ is the soccer player. When we look at Serie A players from 12 clubs using our system, and we select only those players who have covered 10.5 km during official matches, the difference between the ‘cheapest’ and the ‘expensive’ in terms of energy expenditure is exactly the same that we have seen in the car example (i.e. 750 kcal vs 1000 kcal, about 30% difference). This is essentially due to the different amount of accelerations between the two players, precisely because these are the most expensive actions during the match.

So the solution can be to count the accelerations: the player at the beginning was right! On this point, in Exelio, we have worked very hard, but in a different direction. It’s not easy to explain simply that accelerations are even more critical than the distance to get information about high-intensity efforts. As mentioned before, it’s important to have a clear idea about the information we want and, at the same time, understand if the chosen KPI is the right one to give us the information we need.

How are acceleration events counted? The way is quite easy: define an acceleration threshold (the most widespread is 2.5 m⋅s⁻²) and detect all the phases in which the acceleration is greater than the selected threshold. What’s wrong with that? The metaphor of the car helps us also in this case.

Imagine two distinct situations. The first: you’re stopped at the crossroad and, as soon as the light turns green, you start at full throttle. The acceleration is very high so that you feel forced back into the seat. The second: you’re on the highway, driving in the slowest lane and you decide to pass the truck in front of you. Even if you hit all the gas, you will hardly have the same feeling on the seat as before. This means that it’s very easy to strongly accelerate starting from low speeds, but it’s impossible to do the same starting from moderate to high speeds. In other words, the higher the speed, the lower the maximum possible acceleration. However, the power required will be extremely high in both cases, which is equivalent to saying that you’ll need a considerable amount of fuel.

The same goes for the players. The one who most often starts from a standstill or low speeds (for example, a centre back) will easily overcome the acceleration threshold and, at the end of the match, he will accumulate a lot of accelerations. His teammate, who is always moving dynamically on the pitch (for example, a midfielder), will hardly be able to achieve the same result. Which does not mean he didn’t accelerate! He may have done twice as many accelerations as his defending friend but, precisely because he always starts from moderate speeds, he will hardly be able to reach the acceleration threshold. The result? A small number of accelerations exceeding the threshold.
Unfortunately, these ‘lost’ accelerations we described before (i.e. starting from moderate speed with a moderate acceleration) are the greater number of events during a soccer match. If we want to provide a clear picture of the performance, we cannot do without them! The athletes in the previous example simply have two different ways of accelerating and it is essential to detect and describe all these actions for both.

In our experience with the majority of Serie A clubs, during an official match, the average number of accelerations above 2.5 m⋅s⁻² is about 30 per game; which means that the player performs an acceleration every 3 minutes. Are these the pauses you would expect to find for an elite soccer player? It’s very hard to imagine a player during an official match involved in an acceleration every 3 minutes or more! 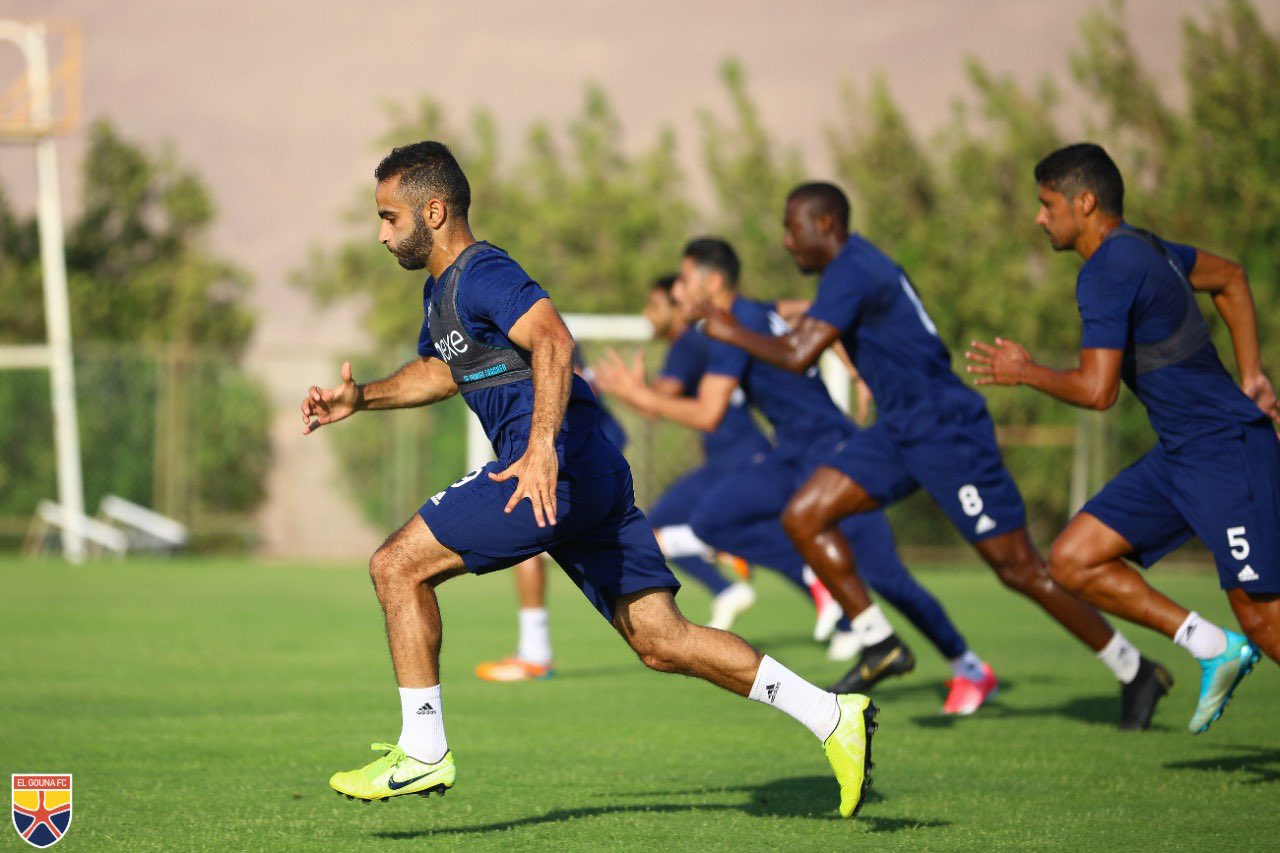 On the other hand, once you’re able to assess the instantaneous consumption or energy requirements from each player (i.e. the time course of metabolic power), the average number of ‘high demanding actions’ that we called ‘Metabolic Power Events’ or ‘MPE’ grows and reaches about 160 MPE per game. That is to say that the player must repeat MPE efforts every 36 seconds for 95 minutes: in this way, we will be able to get a much better overview of the players’ commitment.

In the following table an example of two players playing the same match:

Forget for a moment the last column of the table. With the accelerations alone, player 1 and player 2 seem to have performed in two completely different ways. What would be your conclusion about the performance of players if you had only total distance and accelerations available?

When we also take MPE into account, the performance turns out to be exactly the same between the two players! This is the typical example of an equivocal answer provided by distance and accelerations alone.

Nowadays the behavior of football players during matches or training sessions can be described thanks to a wide amount of information. There are hundreds of KPI that allow us to break down the performance in detail. Perhaps what is still missing and where we can further improve is the specificity of the questions from which we expect the right answers. If we will move forward in this area, it probably won’t be necessary to get lost in too much data. By doing so, we will be able to describe everything in a “neat and tidy” way.

END_OF_DOCUMENT_TOKEN_TO_BE_REPLACED

END_OF_DOCUMENT_TOKEN_TO_BE_REPLACED
We use cookies to ensure that we give you the best experience on our website. If you continue to use this site we will assume that you are happy with it.OkPrivacy policy