Workload monitoring: why you cannot consider HSR as the only measure of high intensity

High-speed is widely used in team sports to assess the so-called high intensity. For a decade, lots of papers have been written on this topic, but the goal of researchers has changed over time. Let’s start from the very beginning and follow the chronological sequence.

The research on this topic started in the early 2000s. High-speed was considered the unique way to assess high-intensity and only some years later it was specifically defined as high speed running (HSR). HSR was used, together with total distance, to better understand, measure and dose the external training load. More recently, the research became more oriented to find the best balance between training and match load or find the link between workload and injuries.

To answer this question, it is convenient to refer to the following graph, where the speed is reported on the x-axes and the metabolic power on the y-axis.

When the athlete runs at a constant speed (green line), the relationship between speed and metabolic power is linear, so we can use the speed to infer the metabolic intensity. For instance, the athlete can run at an intensity equal to his VO₂max at a constant speed equal to 5 m/s (18 km/h). Once we consider a corresponding acceleration, everything changes. If this is the case, when the same athlete runs at 2.5 m/s with a corresponding acceleration of 1 m/s² (yellow line), the metabolic intensity is again equal to his VO₂max even if the speed is half than before. It’s quite clear that when we deal with accelerated running – which is often the case in team sports – the speed alone cannot be a thorough measure of the demands of the exercise. A further increase in acceleration for the same speed (see other lines in the graph) will correspond to greater energy demand, making the inconsistency between speed and metabolic load even worse.

Given the above, high speed cannot be used alone as a measure of high intensity. It could, for constant speed running (e.g. a marathon runner), but not for team sports.

What is “high speed” for the football player? Where is convenient to set the speed threshold? In scientific literature, the speed thresholds have been always determined in an arbitrary way. One of the first options has been to set a threshold depending on the aerobic fitness level of the athlete. For example, a speed running equal to 15 km/h, which corresponds to the anaerobic threshold of the athlete. As mentioned above, this works pretty well when the speed is constant, but it is not always the case in football. Indeed, there is no meaningful reason to set a speed threshold according to the athlete’s aerobic fitness because metabolic intensity – equal to the anaerobic threshold of the player (15 km/h at constant speed) – can be reached even below this speed when acceleration occurs.

It is maybe more interesting to set the speed threshold at higher speeds. The goal is to recognise a locomotion form that is not so habitual for the football player and often associated with injuries. There are no convincing reasons, from a physiological point of view, to set these thresholds at a specific speed, so a convenient choice is to use the most frequent thresholds in literature: 5,5 m/s for the high speed running (HSR) and 7 m/s for the sprint.

The total distance and the distance covered at high speeds are both workload volumes. In the first case, it’s the “overall volume” and in the second case, it is the “high-speed volume”.
What are the match and the weekly volume by using these parameters? The match can be considered a benchmark since the goal is to train the athletes and have them ready to perform the game at their best.
The following video presents some data from official matches, both from literature and gpexe teams.

While the match load is quite similar in all the examples mentioned before, the volumes carried out during training week can change according to the specific parameter considered (the following data refer to the training sessions only and do not include the match): 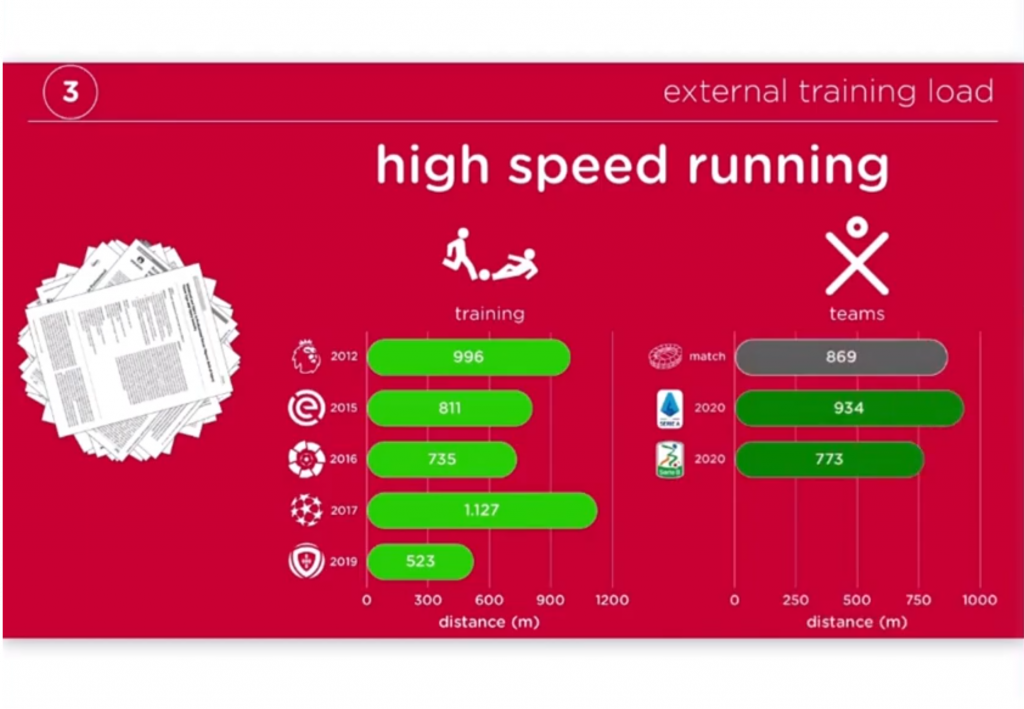 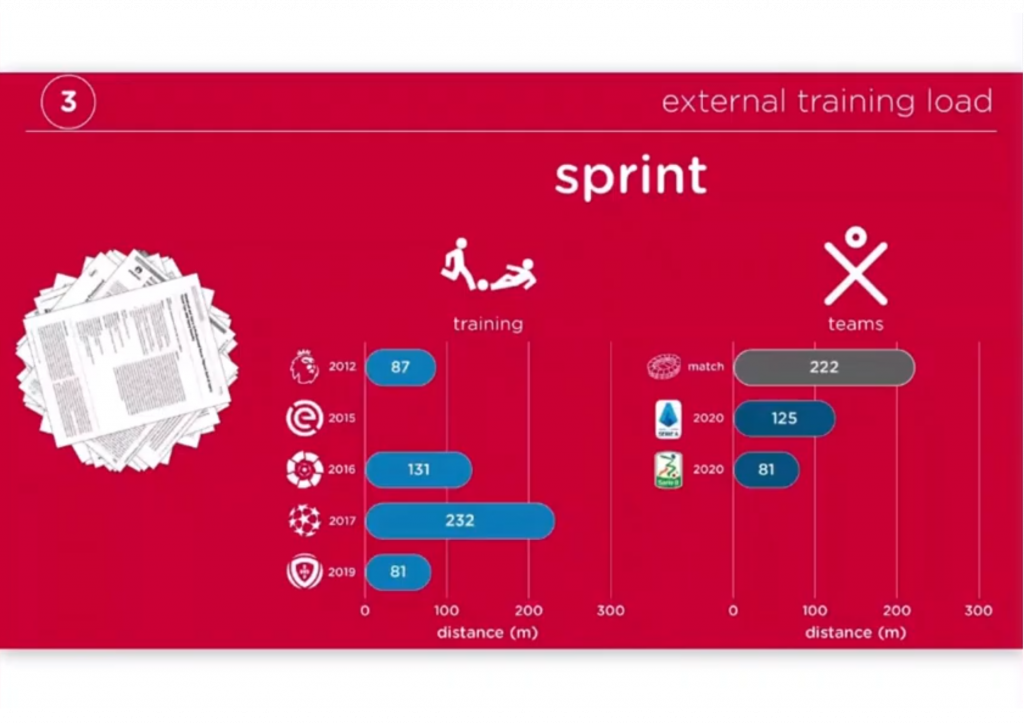 Thanks to the data presented above, it is possible to calculate the balance between match and training within a single week: the training / match workload ratio. We need to keep in mind that this parameter can be higher for two different reasons:

Be aware that the ratio is affected by changes in both numbers, training and match, numerator and denominator.

In conclusion, if we express the match as 100%, how can we summarise the weekly amount of training carried out by our athletes in terms of total distance, high-speed and sprint?

All previous data are summarised in the following figure:

Is this amount of weekly load enough to prepare your athlete for the game or to play a 90-minute game safely?

END_OF_DOCUMENT_TOKEN_TO_BE_REPLACED

END_OF_DOCUMENT_TOKEN_TO_BE_REPLACED
We use cookies to ensure that we give you the best experience on our website. If you continue to use this site we will assume that you are happy with it.OkPrivacy policy