Internal and external training load in soccer: which relationship?

For a training organisation, monitoring the training load is of paramount importance. The aim of this study is to investigate the relationship between internal and external load indicators and to propose a new method for monitoring actual physical fitness. The results support the use of an individualised analysis to better understand the TL administered to soccer players and to monitor the improvement in physical fitness.

The goal of training is to administer an appropriate volume and intensity of training to deliver the appropriate physiological stimuli to achieve adaptations (1,10). Then, accurate assessment and monitoring of training load (TL) represent fundamental elements of the training process (14). It is known that TL can be quantified by external and internal parameters. External training load (ETL) defines the objective workload performed, and internal training load (ITL) defines the individual psycho-physiological response experienced by the athletes (7,14). So, the ITL can be considered as an athlete’s response to a physical stimulus and results from the relationship between the ETL and the individual characteristics such as fitness/fatigue status (3,12–14). Due to these individual differences, the ITL can be differently experienced by each player facing a given external load (10). An integrated and ongoing approach to TL can indicate whether the player is working harder to produce the same external output, therefore a combination of both TL parameters can be useful to provide greater insight to individual training stress (3,5).

Concerning ETL parameter, it has been known that is necessary to take into account both distance covered and acceleration demands; so, in that investigation, we take into account the energy expenditure (EE). For the ITL indicator, we analysed the s-RPE that can reflect the ITL during non–steady-state exercises (6) and team sport (2,9).

This investigation aimed at providing further insights into the analyses suitable to measure soccer’s training loads in order to improve the accuracy of training load analysis. It was hypothesised that an increase in the slope of the ITL/ETL regression line would be found, according to the improvements in the athlete’s fitness status and adaptation.

Experimental approach to the problem. This study aimed at investigating the individual relationship between the internal and external loads (s-RPE and EE respectively) in professional male soccer players to verify the individual analysis’ usefulness in determining a player’s fitness status and workload absorption. The analysis was conducted to investigate the training sessions and matches between July and September 2018.

Data analysis. Data from team field-based training sessions and matches were analysed, including warm-ups and tactical sessions. The data analysis aimed at investigating the correlation and the slope of the regression line (with fixed intercept in 0; 0) between internal and external load parameters and to compare different periods of pre-season and in-season. We analysed three micro-cycles. The total duration of pre-season training lasted from the 5th of July to the 23rd of August 2018 (52 days). The first microcycle (T1) refers to the first month (5th of July to the 5th of August); the second microcycle (T2) refers to the training sessions between the 8th of August and the 20th of August and the third microcycle (T3) refers to the in-season training and matches between 21st August and 23rd September.

Procedures. Players’ ETL was monitored by a portable GPS device (20 Hz GPS-system, gpexe, Exelio srl, Udine, Italy) operating at a sampling frequency of 18.18 Hz. s-RPE values were obtained by multiplying the value of the 10-point Borg scale and the training duration in minutes.

The main goal of this investigation was to find a rationale for single-player analysis and to present an ongoing model for training load and fitness monitoring. The so far neglected slope parameter provides information about the individual capacity to sustain a given external load. It is shown that factors, including fitness characteristics and fatigue states, may induce intersubjective variations in s-RPE scores (2,7,8). In particular, if two athletes with different fitness characteristics are exposed to the same ETL, one athlete would inevitably experience a different effort with respect to the other (4,15). Consistently, in our investigation, players sustaining the same training program reported an intersubjective variability in RPE rating, leading to different slopes of the individual s-RPE/ kJ·kg⁻¹ regression line. In light of that, we speculate that slope values may be sensitive to fitness status.

Analysing the slope trend along with the 3-time intervals (T1, T2 and T3), we detected a mean improvement in individual inclination values (+29.9% of increase of regression slope between T1 vs. T2; +14.3% between T2 vs. T3 and + 48.5% comparing T1 vs. T3). These data were collected during the pre-season training camp and the first month of the competitive season. This period is shown to be typically focused on fitness rebuilding (11), and is characterised by the best aerobic improvement (4). Therefore, the rise of the slope we observed in our players seems to be related to physical fitness. In figure 1, a player, as an example. 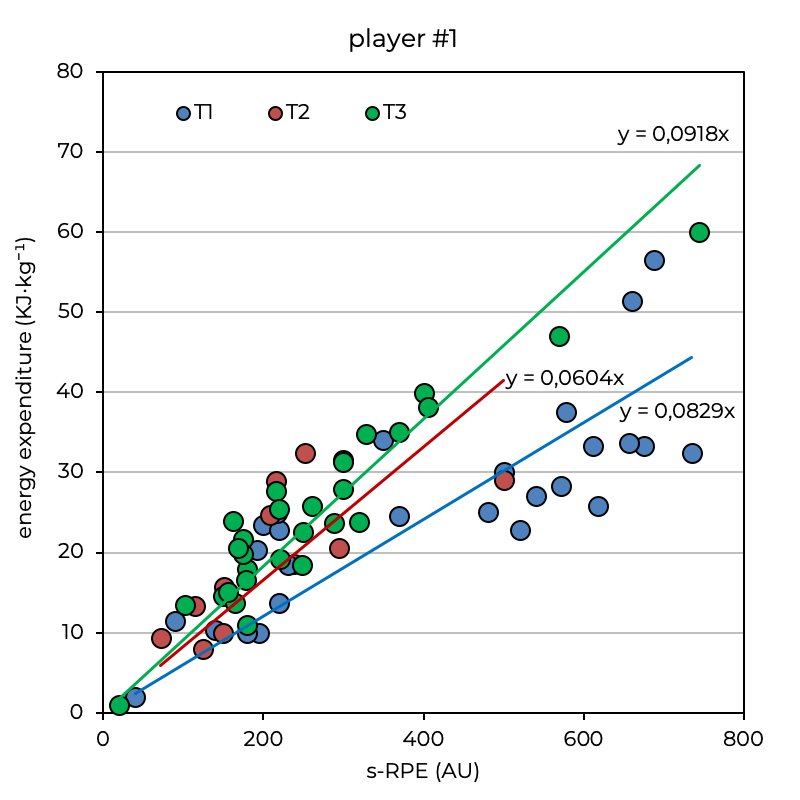 Data presented in this study offers new insight into the perceptual and mechanical demands of soccer, providing information and methods to improve the training load monitoring technique.

5. Carling, C. Interpreting physical performance in professional soccer match-play: Should we be more pragmatic in our approach? Sport Med 43: 655–663, 2013.