“Metabolic Power Events” is part of a series of webinars held by Cristian Osgnach to go deeper on the workload analysis and the concepts of metabolic power and high-intensity through specific examples on the field.

In the first part of the article, we introduced the theory of metabolic power events, specifically by explaining how we can use them to analyse the way our athletes alternate the high demanding phases and the recovery phases.

What happens during the match, especially if the performance between two athletes is quite similar? Can we get some more insight by using the MPEs?
Look at these data from an official match from a midfielder and an attacker: 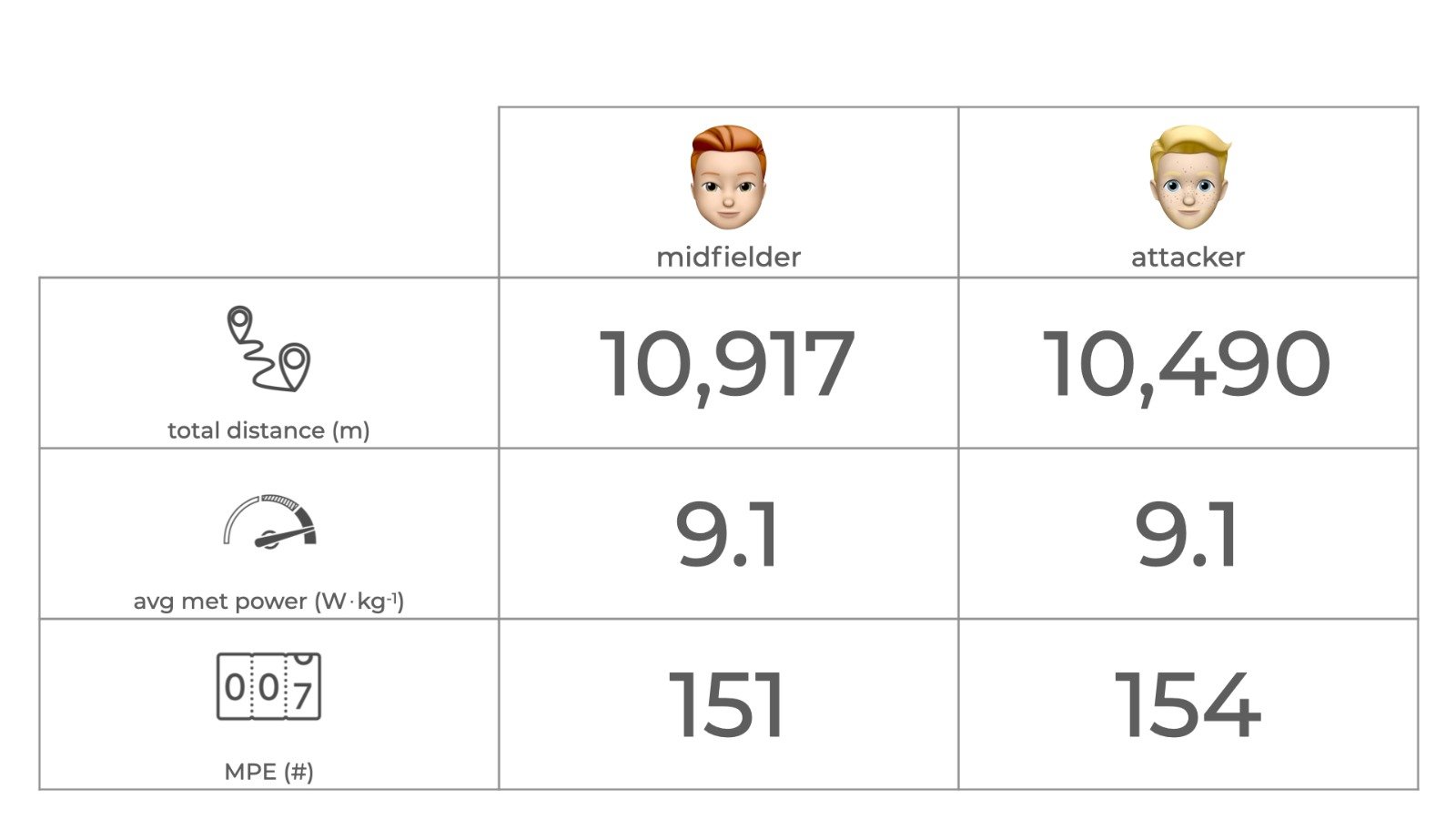 Despite the same number of MPEs, the differences come up from the analysis of both the work and the recovery phases.

To better understand this state of affairs, it is useful to plot the previous data on a scatter plot, with the duration on the x-axis and the average metabolic power on the y-axis (fig. 1 A).

In the same graph, we can also plot the data of the whole team (fig. 2 A), just to compare the behaviour of our two specimens with the other teammates’ performance. 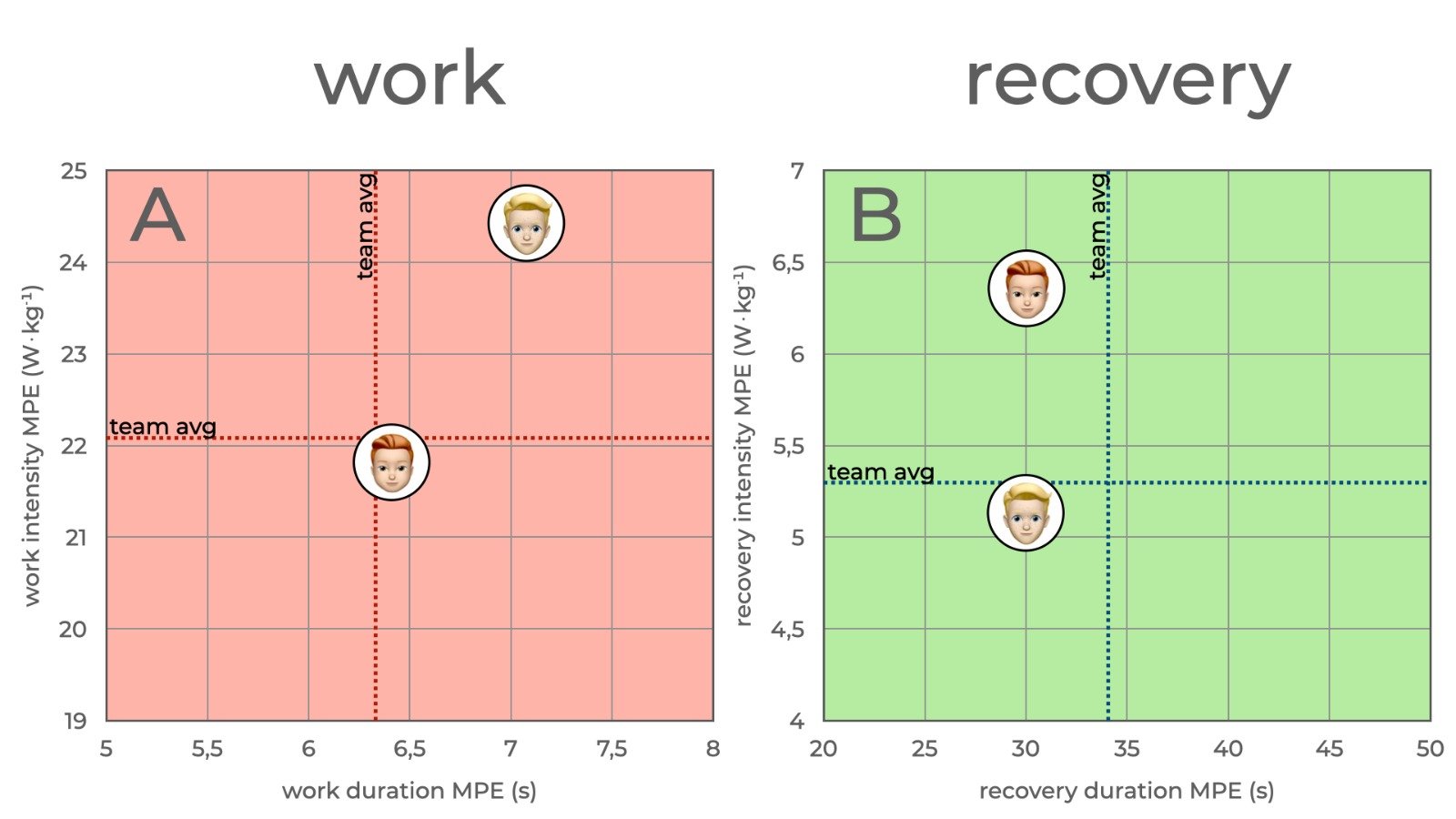 Recovery phases. On the other hand, the strategy to manage the recovery is the following. The average duration of the recovery phase is 30 s for both players, but the midfielder manages it in a more active way (average metabolic power is 6.4 W⋅kg⁻¹), while the attacker seems to be lazier (average metabolic power is 5.2 W⋅kg⁻¹, – 23% than the midfielder).

Also for the recovery phases, it is convenient to represent the data in the same way (fig. 1 B), together with the teammates’ ones (fig. 2 B).

The overall performance shows huge differences between the two. The attacker pushes harder during the short work activities, but he is less dynamic in the recovery phases, which is just the opposite of the midfielder’s behaviour.

Likewise, the analysis of their teammates shows some similarities by role, especially with reference to the recovery strategy:

• defenders are mainly in the centre part, which means that their recovery time and intensity are moderate;

• midfielders are located in the upper left of the graph, which means they recover in less time, and more dynamically;

• attackers are mainly positioned on the lower right of the graph, which means that they need more time to recover and they are often more static. 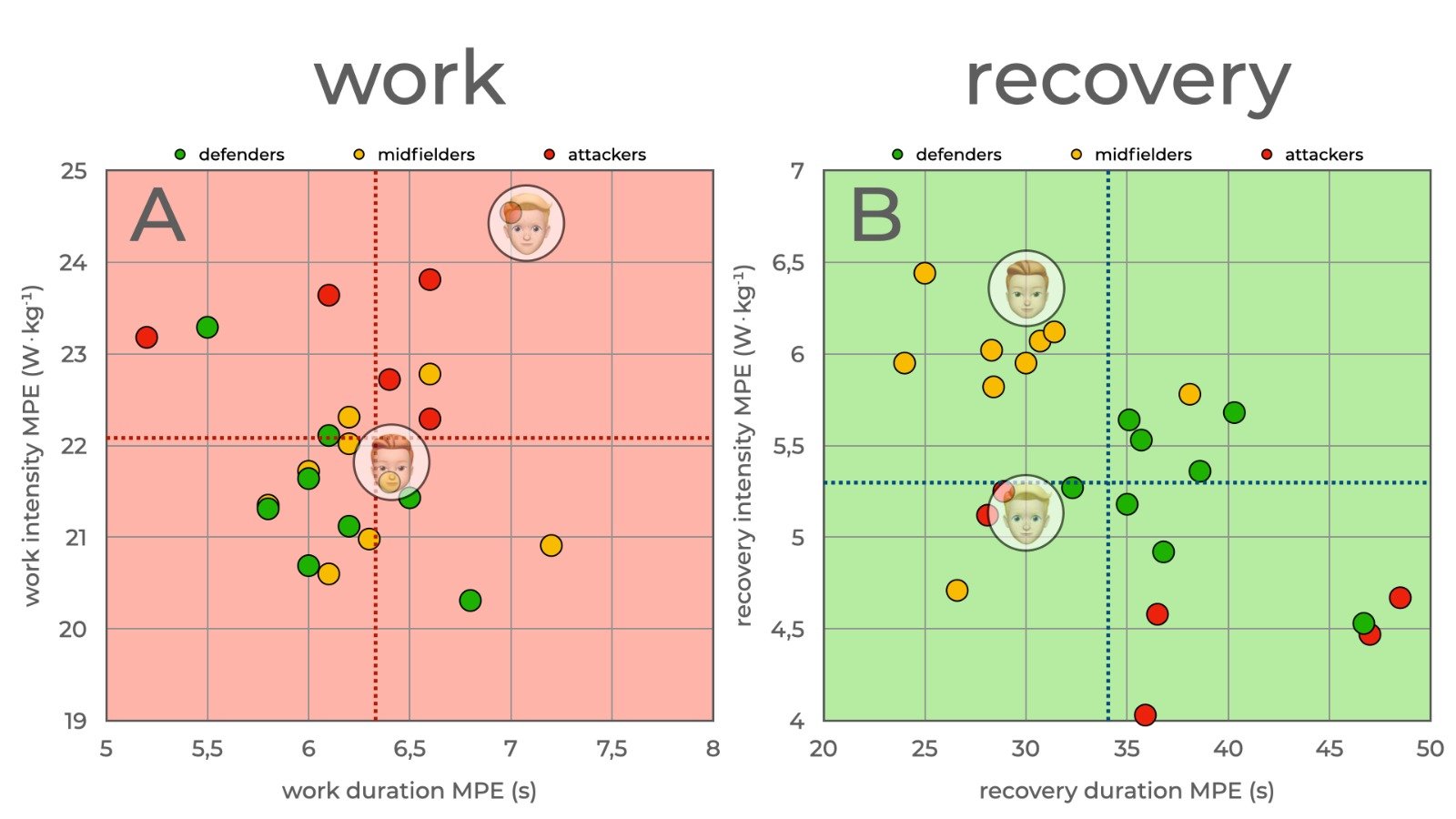 Is more time necessary for the attackers to recover from more demanding work phases or are they just lazier than their teammates? Both cases seem possible. They do not depend exclusively on the commitment or skills of the player. The context has also an impact.

Thanks to this type of analysis, any differences in behaviour emerge despite the very similar general data.

Further scientific contents on the metabolic approach are available for all the gpexe users within the gpexe academy.