Heavy sled training is one of the most effective training interventions to improve the horizontal force, i.e. the forward acceleration. This article relates to the practical experience of Benetton Rugby during the last season.

Many team sports, such as rugby, soccer and football, are characterised by many different playing positions, all defined by their specific performance models. This underlines how the need for individualised training programming is not only recommended but a key factor for successful team performance, especially during the in-season phase of the training periodisation.
This is particularly true in rugby, because of the many major differences characterising each playing role (3,4,6). Speed, strength, power and anthropometric measurements have to be taken into account to plan a tailored training program that can fulfil the requirements of the performance model of a specific playing role. Following this line of thinking, we can assume that different training loads can be more of a benefit to some players rather than others. For instance, we can assume that wings or fullbacks, typically amongst the fastest players on the field (5,7), would benefit from the use of high training loads that transfer to higher initial accelerations, which are crucial for those playing roles.
In general, every player could have his personal training load set according to his specific acceleration-speed profile and the requirements of his playing role.
In order to elicit specific improvements of the early acceleration phase, the RSS (resisted sled sprint) training method was chosen, this choice being backed up by many studies which confirm its effectiveness for the aforementioned purpose (1,11).
That being said, the aim of this experience was to investigate the effect of a seven-week in-season customised RSS training on professional rugby players’ acceleration-speed profile.

Twelve professional rugby players were split in two different groups, according to their playing position: six players (forwards) were assigned to the control group (CON), while the remaining six (backs) were assigned to the experimental group (EXP). Each group underwent a specific training schedule.
Traditional training programs were kept similar between the two groups. However, while EXP group included at least one RSS session per week in their training routines, CON group added the same number of traditional strength training sessions per week to compensate for the effect of the RSS training. A mean of 9 RSS sessions was conducted before the end of the training period (4th of February to 25th of March 2021).
The weights used in the RSS sessions were meant to cause 50 and 65% max speed drops in two different training days, corresponding to loads between 80 and 108% of body mass (BM) applied to the sled.
Before and after the training protocol, every player had his personal acceleration-speed profile (ASP) recorded and collected. This data was obtained during in-field tests via a GPS system like the following. On the 18th and 25th of January, after a warming-up and dynamic stretching session, both the control group (CON) and the experimental group (EXP) performed a free weight all-out sprint on a synthetic field for 40m and 30m respectively. The data collected from this sprint was used to determine each player’s acceleration-speed profile in the pre-training condition (PRE).
The players were then asked to perform 4 more sprints with an increasing overload equal to 25, 50, 75 and 100% BM, with 3 minutes of passive resting time in between. The data collected from these sprints were used to determine each player’s load-speed profile which would have been used later on in order to define the precise weight amount associated with the aforementioned speed outputs.
On the 22nd and 25th of March, both groups performed again a free weight all-out sprint to determine the acceleration-speed profile in the post-training condition (POST) and make the due comparisons with the pre-training condition (PRE).
All these tests were conducted in the open air using the validated GPS system GPS pro² (Exelio Srl, Udine, Italy). The collected data was then plotted to generate the personal acceleration speed profile of each athlete (ASP).

There were no significant differences between the control group (CON) and the experimental group (EXP) in the pre-training condition (PRE) regarding the following parameters: a₀ (max acceleration), v₀ (max speed) and tau (time constant). 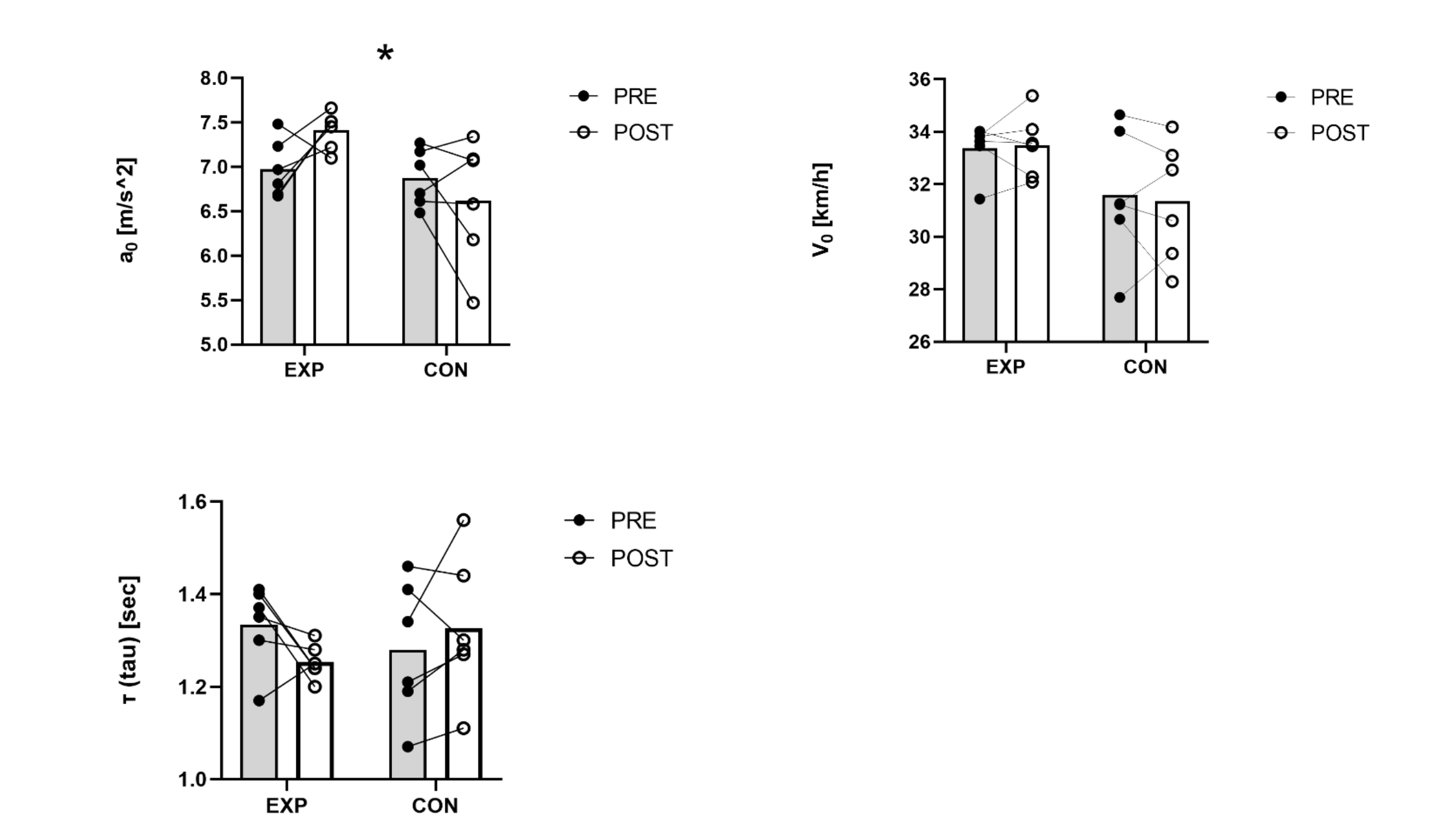 Figure 1: from top left, clockwise: max theoretical acceleration (a0), max theoretical speed (v0) and time constant (tau). Data of the EXP and CON groups are plotted as a function of time (PRE vs POST training).

The results of this study can be of use to trainers and coaches with a view to improving athletic performance with an eye both on each player’s athletic parameters and the demands of their specific playing role.