Return To Play: on-field monitoring. That’s the speech’s title of our mate Michele Turloni, who has been our guest in the “4th Football Analytics & Talent Identification Online Event” organised by Vonlanthen Group in March. For 10 years in charge of injury recovery in Udinese Calcio, Michele told us a lot about how he makes decisions in his daily work.

How to plan the weekly workload after an injury? Which KPI to monitor during the RTP in football? What contribution can the Acceleration-Speed Profile (ASP) provide in this context? This article is an extract of Michele’s speech, with a focus on the last point: how to use players profiling for a safer rehabilitation process.

During the recovery path of a player after an injury, the ASP can provide you with very useful information. A prerequisite is knowledge of the player’s profile before the injury (see the figure below). 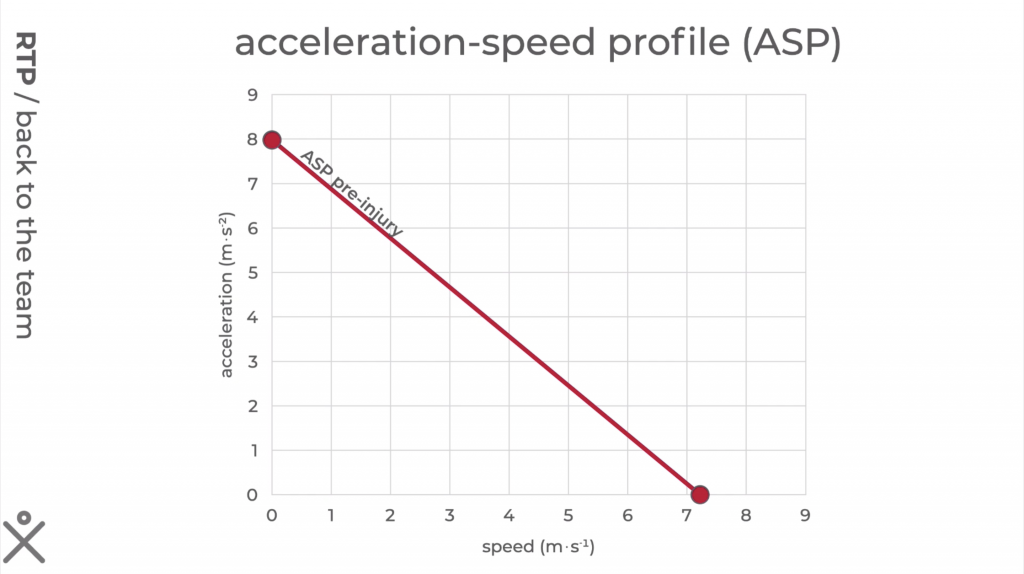 If we know the subject’s profile before the injury, we can greatly benefit from the evaluation of its profile during the weeks of recovery. Here the “in-situ” ASP comes in handy. What is it and where does the idea come from? We have to go back a little.

To learn more about the method, watch this extract from JB Morin’s webinar.

Which training content can we adjust to the player, by analysing the profiles? How can I train the player as the function of his force-velocity spectrum? To go in-depth on injuries, better training management is related to better injury prevention. The goal is to adjust the workload for the player to minimise the risks.

Knowing the profile of the players will help the staff to better consider the individual needs of the player. If he is injured, in the RTP process we observed that after a hamstring injury, football players had a lower maximum power (P𝚖𝚊𝚡) and a lower maximum acceleration (a₀), but at the same time they had the same maximum speed (v₀). Two months later, all the values were back to normal. It means that the ASP was modified after rehabilitation.

The full paper is available on Research Gate, here.
Here is another paper on this topic.
Have a look at a second experience, with FC Grenoble Rugby, reported in this video.

What happened to the athlete that we took as an example?

The graph shows how, while the theoretical maximum speed (v₀) remains almost unchanged, it is the player’s ability to develop the maximal horizontal force (a₀) which grows slowly over the weeks, throughout the recovery time.

This is an excellent indicator of which are, most likely, the mechanical properties that should not be taken for granted during the recovery process to allow an optimal return to the team. The athletic staff should ensure that they have brought the injured player back to the pre-injury benchmarks, not only in terms of speed (that can be rather fast) but also in terms of acceleration (which usually takes longer).

END_OF_DOCUMENT_TOKEN_TO_BE_REPLACED

END_OF_DOCUMENT_TOKEN_TO_BE_REPLACED
We use cookies to ensure that we give you the best experience on our website. If you continue to use this site we will assume that you are happy with it.OkPrivacy policy