The typical way to assess the acceleration capacities is to perform a maximal sprint starting from the blocks. This would not always be truthful for the football player, who rarely starts from a standstill. This study by Sonderegger K, Tschopp M and Taube W (2016) is very clear about where the problem lies. The authors asked the subjects to perform all-out sprints, starting from different speeds. How do things work when we deal with speed and acceleration if this is the context?

Take a closer look at figure 1. On the top of this picture, there is the time course of speed. The subject performs four maximal sprints, starting from different speeds: 0, 6, 11, and 16 km/h. Whatever the starting speed, the maximal velocity achieved was the same under all conditions. 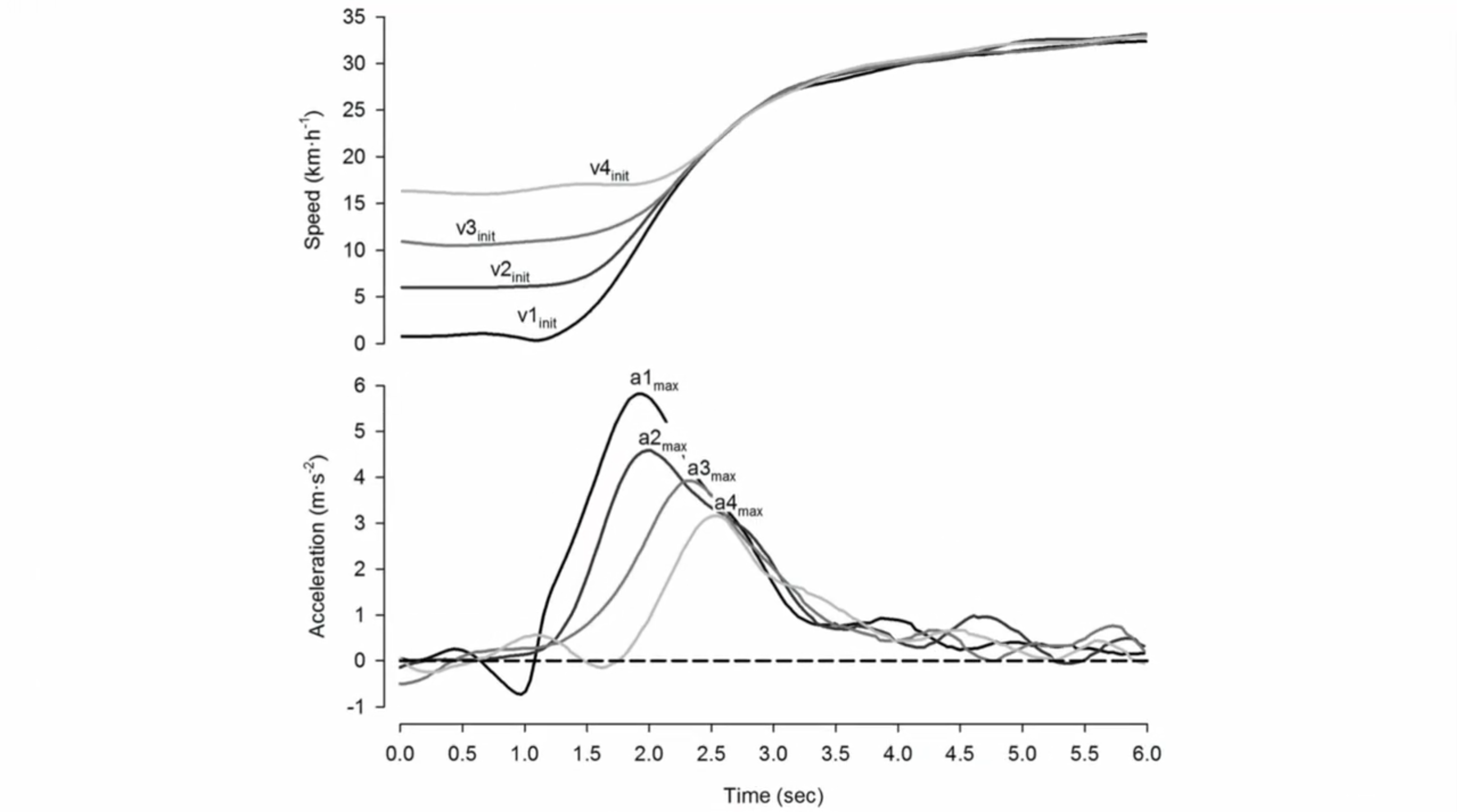 On the bottom of figure 1, there is the time course of acceleration. To get information about the accelerations, it is usual to set an acceleration threshold (here it is 3 m/s²) and get a high acceleration zone (green zone). Here we expect to find interesting accelerations.

When the starting speed is 0, the acceleration peak can be very high, almost 6 m/s² for this subject. The threshold we set represents in this case only 50% of the maximal acceleration achievable. In other words, when this subject starts from a standstill, all acceleration events above 50% of his maximal capacities are detected.

When the starting speed is 6 km/h (fast walking), the maximal acceleration achievable decreases to 4.5 m/s². This means that all accelerations above the set threshold are at least 66% of the maximal capacities of this subject.

If the starting speed increases to 11 km/h, the acceleration peak decreases to 4 m/s² and the threshold is now 75% of the maximal acceleration capacities of the subject.

The weakness of considering the acceleration alone should now be clear. We can not understand its magnitude, referred to the capacities of each athlete from any speed, without considering the starting speed. This will be useful in the next steps to introduce the mechanical analysis.

Since the goal was to solve the limits discussed above, we based the new mechanical analysis on two pillars:

• the Acceleration-Speed Profile (ASP), to assess the individual acceleration capabilities of each player,

• the measure of the mechanical workload, related to the individual ASP, to assess the amount of activity performed close to the maximum intensities.

If representing the sprints in a different way (speed on the X-axis and acceleration on the Y-axis, see figure 3), it is clear that, despite the different starting speed, at some point, all sprints lead to the same combination of speed and acceleration, up to the maximal speed. This allow us to define the red line, which describes the best mechanical power achievable by this player across the entire speed spectrum, i.e. the Acceleration-Speed Profile.

Indeed, if we draw again the acceleration threshold at 3 m/s² and the corresponding high acceleration area (in green), we realise that only sprint #1 is detected as an acceleration. What if we draw a fraction of the Acceleration–Speed Profile to define the high mechanical work area (in red)? All sprints lie in the red area! 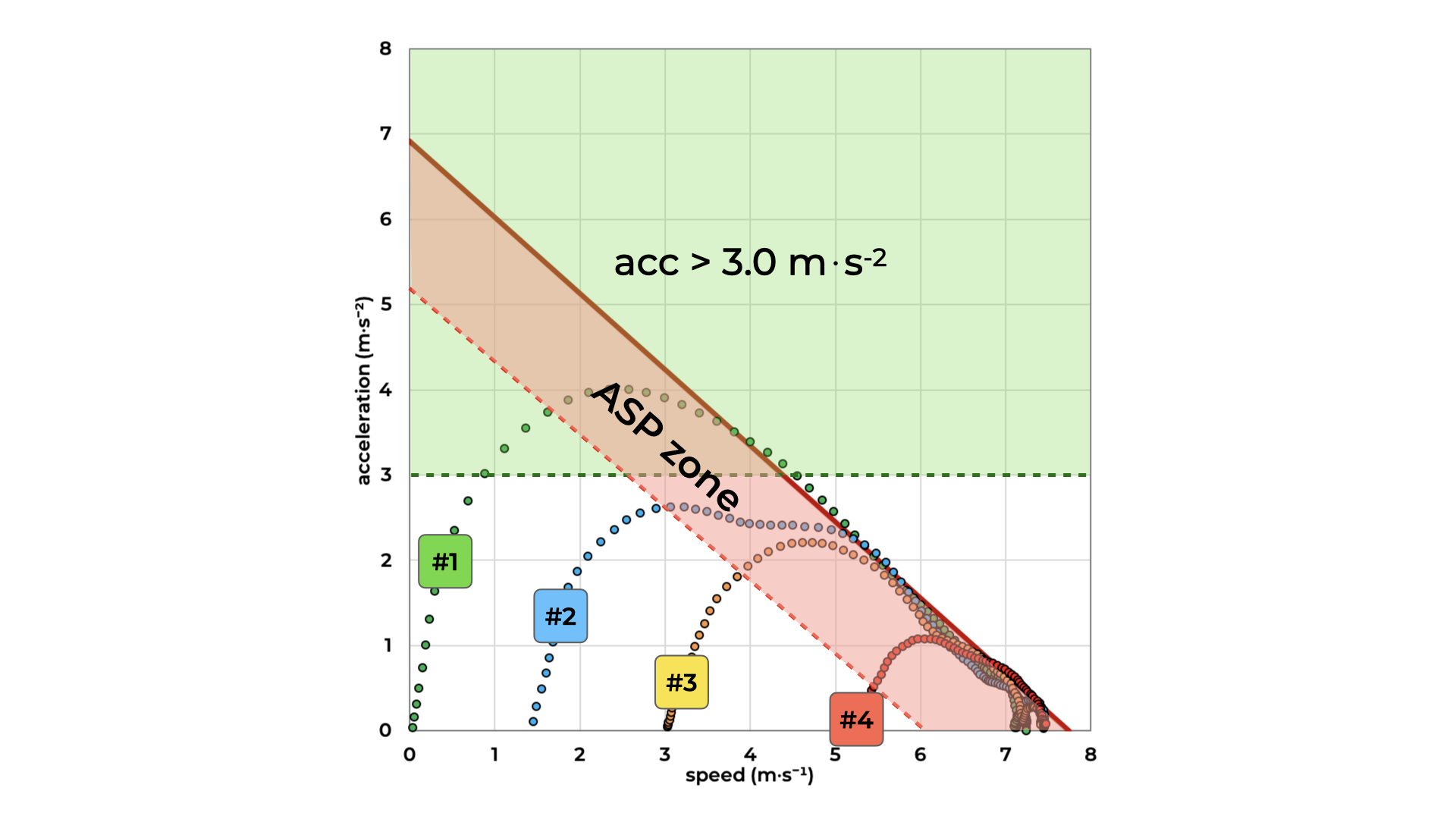 The classic way to obtain the ASP is from a 40-m sprint test, which is the minimum distance necessary to reach maximal the speed for football players. In football, generally, all maximal sprint tests are unpopular among athletes and coaches.

For this reason, we suggested a different way to obtain the Acceleration–Speed Profile, by using a sufficient amount of training sessions and match data: the ASP “in-situ”. From GPS data collected over a defined period of time (e.g., one month), we plotted all raw data like in figure 3 and we get the same outcome obtained from a maximal sprint test. Once the individual limit of acceleration capacities for each player are identified, whether from a single test or from the regular activity performed, the second step of the mechanical analysis can follow.

The idea is now to consider the training load given by the amount of work performed in the red area, which is the sum of all most demanding activities from a neuromuscular point of view.

For the sake of clarity, we can also split this workload into three zones. The first is carried out at low speed with a predominance of force, the second is performed at moderate speed with a prevalence of power and the third is done at high speed where the focus is, of course, on the speed itself. In addition, also the number of occurrences, for each zone, can be counted; by doing so, we can also get the events that allow each athlete to approach his maximum limit. We called them bursts…

We will deal with this topic in the next article.

Further scientific contents on mechanical analysis are available within the gpexe academy for all users (access from any web app page).

END_OF_DOCUMENT_TOKEN_TO_BE_REPLACED

END_OF_DOCUMENT_TOKEN_TO_BE_REPLACED
We use cookies to ensure that we give you the best experience on our website. If you continue to use this site we will assume that you are happy with it.OkPrivacy policy